But that is because Eddie has done something twice this week.

The first was on Sunday.

'Salina and I had gone down to the beach for a swim. V finished painting her room and then came down to join us. As my burn threshhold is set to something well prior to theirs, I returned first.

(BTW - V's threshhold was about 1/2 an hour before he thought it was. 'Salina has inherited the sort of genes from either her auntie or her father that sort of only hits red in direst of circumstances OR under her eyes.)

Anyhow, I returned to wash off some salt and sand, and about to head towards the stairs that lead to the back door, spied Eddie playing with something.

Something long and thin - and still moving...

I got close enough to identify "snake" (albeit obviously a baby, but I can be a bit of a baby about snakes) and then scarpered back to the front steps and locked all doors - Eddie has a habit of bringing his playthings in to the house, and frankly this is the sort of sport I would like to discourage - especially in this particular instance.

I was thoughtful enough to text my husband and child, warning them of the danger...

When they returned, we found Eddie had sported a fair bit of the play out of it (although not to death, so he isn't a felon - yet. Apparently snakes are all protected species)

I handed V the long-handled tongs and armed myself with the camera and the poor blighter was captured (in the laundry - enough incentive to neglect my new toy for a few hours) and released back into the wilds of across the road.

As you saw from my photo, I wasn't very brave in getting close-up shots! 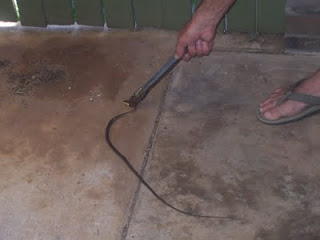 So fast-forward to today. I was working from home, and V came home from work early. He went downstairs to grab some coke - and found Eddie in the garage with a new toy. Another snake.

This one definitely still at a far livelier stage of play, and at the appearance of V made a move to escape. The best hiding spot he could see was a pile of bags (containing 'Salina's worldly possessions, as her room is being painted and recarpeted) and so he scampered.

Eddie contemplated a chase, but V with a broom dissuaded him. Eddie eventually came to where I was (by now by the back stairs after a yell to "come hold Eddie" from V).

V - with trusty rake - started sorting through the bags. Finally, in one (filled with painting supplies and canvasses) he struck gold, and manouvred it to the front lawn. He upended the contents and the snake did an excellent job of hiding under everything until there was nothing left to hide under - so he turned to go back into the bag - rake stopped him.

Then her looked at what was holding the rake and decided he would chase that instead. (insert girly scream from wife here)

V did a dance with the snake and the rake until the snake saw a garden bed to hide in.

So - guess which garden bed will NOT be weeded this afternoon? And guess who WON'T be doing it?

See - that is better than belly stories.

oh, and for those who want asides - the first snake was - we believe - a yellow-bellied black snake - or for those who like their snakes less fancy, a common tree snake. Perfectly harmless unless you are a frog.

Today's snake was either one of them OR it could have been a whip snake. Potentially poisonous. V thinks the former - not for the venom aspect, but because the whip snake reaches only 80cm, and he thinks this one was HUGE!!

If it is the former - the fact that we have a nest somewhere for Eddie to forage freaks me out.

Oh - and if YOU want to freak out to local snakes, here is a link...
Posted by jeanie

Well I just hope they were non-poisonous, because there is V. doing some snake-handling in THONGS!!!

Oh. And I did not click on your link.

All that scarpering ()from pregnant ladies) and scampering (by snakes) has quite exhausted me. What a tale.

Eddie is being a Protector. I am imagining Axel trying to do the same thing... highly unlikely. Probably jump into my arms and squash me.

For the record, I think all gardening should cease at 7 months of pregnancy (if not sooner). Surely V can garden with a fork in one hand and tongs in the other?
:-)
BB

We used to get red-bellied black snakes, tiger snakes and browns hanging around when I lived up Bendigo way.
*shudder* The adage up there is the only good snake is a dead one ;)
Please be careful!

I second Jayne's comment! Growing up in bushland in country Vic, it used to be a common sight to see Copperheads, Red-Bellies and Tiger snakes. *shudder*

I only enjoyed the summer months once I moved to the big smoke.

Trace - be assured the potentially more poisonous one he wrangled in his workboots...

Debby - you are the reason I gave plenty of warning about the link.

BB - ah, but gardening is far preferable to what he is setting forth to do tomorrow - whippersnapping and mowing - I think a little genteel weeding won't affect me too badly (but I shan't weed THAT bed)

Jayne - we had our share growing up - brown, black and carpet pythons generally - although that garden hose variety were always worth a freak out!

Melody - at least ours were polite enough generally to not infringe too much of enjoying Summer.

Wow, so many different snakes you get up there! And confusing with so many of them being harmless or "weakly venomous" so it becomes rather vital to identify them. Down here we don't get as many kinds, but most of them are highly venomous. Fortunately they are usually rather shy.

I'm not sure about Eddie being protective. Suicidal is what comes to mind first.

Hope the snakes find another playground from now on.

eeekkk & shudder.
I don't like snakes unless they are about 6cm long and red.
I hope that have cleared off now.

ps my word verification was decancal ...is that what will happen to your ankles when your gorgeous bump gets evicted.

You have 16 species of snakes that are venomous in your area?!!!!! And what the frick does potentially dangerous mean? We've got, to my knowledge, two - the timber rattler and the copperhead. Both rarely fatal.