Ah yes, over another month and what to show for it?

Well, nothing really, because I just dyed away all visible evidence of the month that was!!

Oh, I slay myself.

Anyway, update from us is not much to blog about.

We went on holidays (and actually was PAID during that time for the first time in 18 years - the joy of being a permanent rather than casual employee). Of course,I did ensure I got approval for holidays by promising to be back at work for one day in the middle to pay everyone. So my 2 weeks holidays was actually 2 blocks of 6 days...

For our first block of 6, we had to wait a day for 'Salina to finish school, so with the day travel there and the day travel back, we had 3 days in Brisbane. In the intial planning stages there was an original intent of running around like mad things trying to catch up with everyone. Luckily (?!) I was not organised as I would have wished, and therefore we had a leisurely catch up with only a few very special people.

The second break saw us travel to visit various members of my family (including my sister). It was great to spend a longer time with them rather than a weekend, as it allowed Paris time to actually thaw and interact (with most).

Paris is a rather shy creature, startled by sudden movements and overt displays of tomfoolery. In fact, even the catching of the eye will result in her defensive posture - assume the invisibility cloak and melt into the shoulder of whoever she is being held by (or has been begged to hold her).

It was actually a relief that both our Brisbane "family" and those related by blood got time to witness that she does indeed make sound (and some of it is very intelligible) and is an interactive - if extremely wary - toddler.

Since being back, I have been immersed in work and the garden - since the very wet Summer we had when our vegetable gardens slid into what we referred to as "Lake Paradise", the yard has been a wasteland of neglect. Many hours and a few sore muscles later, it is now a wasteland of attention, with piles of dirt awaiting redistribution once we work out where a vegetable patch or two may be most viable. We do have some rather grand plans, just awaiting a few grand resources to plant them.

I don't talk a great deal about work on here - and that is because long diatribes get edited. And then edited a bit more. 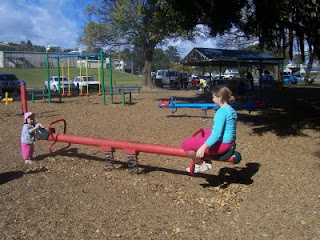 All in all, its a bit of a see-saw.
Posted by jeanie

Yay on having a proper holiday!
AND being paid for it, too :)
Both girls are growing so quickly :)

I'm glad someone is appreciated enough to get paid vacation. Even if you have to threaten holding out on putting out the payroll to get it.

Nice you got to visit long enough for the toddler to warm up to the weird people who wanted to hug and cuddle and squeal at her. It takes a while sometimes. For that reason I'm always glad to host a young grandchild's family long enough for the little ones not to run screaming in fear at my approach.

By the time that I get there, she'll be much more sociable, ya think?

I do believe so, Deb - if not, we can overcompensate by pushing forth the older, extroverted daughter who already thinks you are HER friend.

Leenie - that is an excellent planning strategy.

Jayne - they are indeed.