On Easter Sunday, Nana and Grandpa came to visit for a "picnic" - which was held in our living room, as nature was all promises and no follow-through in regards to weather.

Amongst the goodies was this most gorgeous little number: 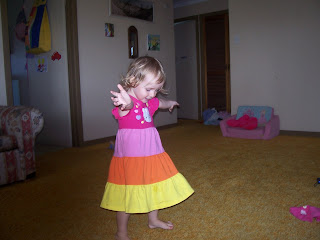 No - not the child, but the colourful twirly dress that she models - isn't it the most fun?!! Paris fell in love with it and wanted to wear it right away - and again the next day... 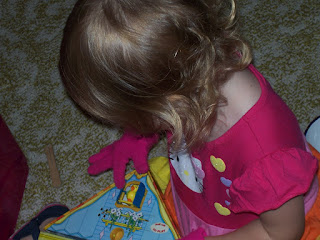 Perhaps it was the chocolate wearing off, but she wasn't as forthcoming with photos the next day - and had no patience for Mummy and her cries of "show us the shoes" because cats are a favourite here - and she has great cat sandshoes that we thought would really be the last paw in fashion pairing... 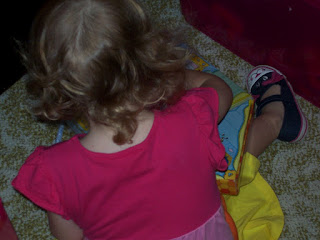 Thanks Debby - it (and everything) has been much appreciated.
Posted by jeanie 3 comments Links to this post

Back later
Posted by jeanie Links to this post

The tale of Miss Jeanie and the "Bad Fish"

I haven't had the blog groove happening for a bit - a combination of life happening and life happening - too much, too fast, too out of control and too crazy - fraying around the edges and not a lot of guts to keep all the balls in the air, so to speak.

So I know I have to get back to blogland, and Bush Babe's mention of the demise of the hapless catfish triggered a memory, and Debby queried and I figured I am up for a yarn...


A long, long time ago (last century) (not even the last decade of last century) (1989 to be precise) Shop-A-Dockets* had just made their first foray into the supermarket checkouts of Brisbane.

At that particular point in time, I was a poor student in Brisbane, sharing with a flatmate called Hip and 2 cats called Des and Cairo in a half-house in a suburb that was about to be launched into renovators delight but at that point was better known for its semi-regular mention in the Fitzgerald Enquiry - we actually thought the girls who often washed their cars in bikinis down the road were just extra friendly!

Anyhow, these factors all collided in the tale I am about to tell... (well, okay, the girls down the road aren't in the story)

In the suburb that was about to be launched into renovators delight the first move into such delights was a brand new shopping centre, with a brand new supermarket - a way fancier supermarket than we tended to gather our folorn vegetables and home brand groceries, but although the delights it offered were ever so slightly more expensive we were tempted - by the proximity (and probably by the fact that they had these new-fangled Shop-a-Dockets - shhh) (the fact that they advertised "singles Thursday" shopping was in NO WAY a factor, however, and I will meet anyone behind the bike sheds who even thinks such a thing) and - well, by the proximity.

At the same time in history, lured - no doubt - by the offer of Yuppies galore, a pet shop a few suburbs away agreed to a Shop-A-Docket campaign.

The collision of these ideas occurred when we noticed their coupon - "Free Fish" - with ABSOLUTELY no requirement of purchase** (although it was limited to "one per family").

When we got our first coupon, we discussed the delights of such a promise. A free fish would be a goodly thing to add to our household - especially since the flatmate-that-never-was prior to Hip had left a fishtank that had held 2 inhabitants, Big Fish and Little Fish - but Little Fish had gone to that great fertiliser factory in the garden and Big Fish was sort of at a loss - that and there was never anything on the television that we really wanted to watch.

It takes a great deal of planning to think about adding an animal to a household - well, it takes at least a discussion of names. Once we had hit upon a name, we knew that coupon would be put to good use. The first fish was anointed "Con" - short for "Fish under Conjecture".

Before we had trekked to the relevant suburb however, manna in the form of another docket fell into our hands. The second naming was far easier - and marks to anyone who could give the reason that the second fish was named "Eric"...

As we were about to get into the car for the foray, our neighbour came to the door with ANOTHER docket - and an offer of being the person to collect on our behalf (she had an assignment due and was desparate for an excuse, apparently. She already had 2 well-named fish)

A hasty house meeting was called in regard to the all important name of the third fish - after 2 great names, what could the other fish be called? We ended up with "Gilla" - short for "Other Fish Singular".

We returned with the fish (from a petstore with a very grumpy owner - apparently the free fish were on the road to sending him broke - although we did purchase some weed, food, fish toys and a filter from him) and set up our new entertainment system.

The first few weeks of fishwatch were great fun, until the weed had well and truly won the battle of space - so we moved the tank from the front window (who knew photosynthesis would be so effective?).

With the additional space, it appeared that bullying was on the agenda for the remaining fish.

First Con attempted to gain the upper fin, as it were, and before we knew it, we had the blue lights out to investigate the case of Big Fish floating - and given the treatment Con was meting out, we thought we had an open and shut case.

Con (renamed Con the Killer Fish) was sentenced to life in the trough, and the next weekend I made the 10 hour trek to my parents property, Con was in the esky.

(At that point in time, life in the trough wasn't that bad - there were at least a half-dozen fish in there, with a tyre hidey-hole at the bottom and an abundance of constantly replenishing green slime that appeared to be superfood for the fish - Con, our biggest goldfish, was about 1/10th of the size of the hardtimers in situ)

However - the next week, Eric was found on the upside of the water, not quite dead but with half a fin missing and the bit of fin left over was pointing at Gilla (henceforth known as Gilla the Killer Fish).

Gilla got the next esky to the property.

So, a bit of an anti-climax to the whole yarn there. Every fish (well, except for Big Fish and Little Fish - but they were support characters only) lived happily ever after. The girls down the road put some clothes on. Jeanie went on to have a fabulous career in Sydney** (and then went on to throw it away and enact the role of "Grasshopper", unfortunately NOT in any meaningful kung fu analogy) and Eric went on and had a long and healthy life with Hip, Des and Cairo.

** As part of my fabulous career, I once got a visit from a Shop-A-Docket rep, and mentioned the tale of the fish - apparently, it is part of Shop-A-Docket folklore and a firm reminder to all promoters of wares through such a method to add a "must buy enough to make the promotion worthwhile" rule of thumb.
Posted by jeanie 7 comments