There are several obstacles between me and being an Internationally Renowned Food Blogger. 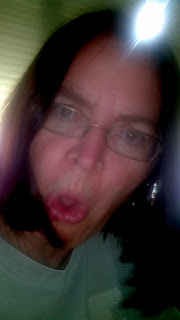 Complete lack of poise (although that bright light shining out of my grey streak head is an attractive feature that should be used to my advantage in the IRFB stakes, perhaps...) 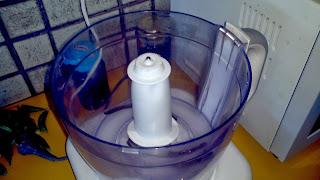 I am guilty of contempt for my perfectly adequate equipment - the abuse carried out on this particular piece was due to a failed gingerbread experiment.  The gingerbread turned out fine - the invectives cast since in its direction as I have to deal with a deformed plastic-y bit in the middle however makes it far less sweet in my memory. Complete lack of food styling nouse.   I have read the links people have helpfully sent me in my quest to be an IRFB- but until I have a camera I can respect (or, indeed, even call a camera), general style or proper lighting, I offer - well, I don't really, do I? 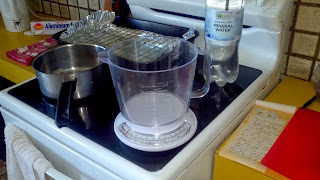 And even if I had all of that, there is a bit of a constraint in the food preparation "space" - and I use that term advisedly - in fact, whenever I do start to get an inkling of maybe flexing my inner Food Blooger (typo left deliberately), I only have to move the pan to get out the scales and then stack the chopping board on the food processor, take the oven glove and put it back on the hook, rearrange the dishes awaiting sink action, rearrange the dishes post sink action, revise the alfoil angle thing that is real estate greedy and rearrange the deckchairs.  Luckily, it is only three paces from one end of the kitchen to the other so its mainly your brain that gets a workout... 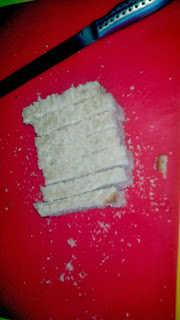 I am sure that an IRFB would have made the crumbs the hero of this picture, but these little soldiers were so valiant... 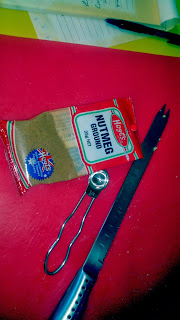 And an IRFB would have had the fresh Nutmeg in the cupboard - which I actually did have - but they had been in there for long enough to have started their own civilization.  They are now forming part of the next generation of compost.  Its okay, though, because I would have had to find the nutmeg grater, which has been pilfered by my second daughter for playdough use (and had often been so pilfered often by my first when she was in the PD zone). 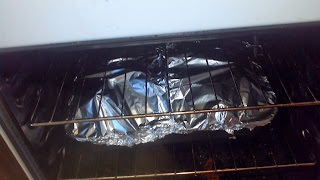 They also would have had the wherewithal to photograph the stuffing, the stuffed and the post cooking delights while waxing lyrical about the whole tenting process.  Heck, an IRFB may have even remembered to massage with butter.

Ah well, we eat well - and until the internet transmits taste and smell, you will just have to use your imagination (or come visit)...

Internationally: Check. You're on the opposite side of the globe than I am.

I think you meet all the criteria. :)

Someday, I WILL show up there. You'll probably be so astonished that you'll forget to turn the oven on.

You are far too sweet, Kelly. And you are armed with a good imagination, which helps greatly in recipe reading.

Debby - you know the welcome mat is out for you!! And no, you can't take your comment back - I am waiting.

You know all you need is some planning and some decent light... right? I am totally going to prove it one day. And would you quit pulling faces at the camera, woman! Seriously folks, she's quite beautiful... but always the class clown.
♥

Dear heavens. Here comes your sister and she's got a camera!!!!!

BB - a new kitchen and a lotto win wouldn't go astray either, BB.

Debby - it is a warning the extended family often squark (or would be, if there wasn't a SIL and an aunt also in camera mode)

i love this post! it explains why i'm not an IRFP either! excellent.

oh, I think that you are an excellent food blogger - in fact, I am thinking of making your Orange Polenta biscuits this afternoon.

You are pretty damn fabulous in my opinion! x