The Parisian Boulevardes of my childhood... (part whatever)

Young enough that my mother still thought that she could tell me what to do.

It was the Seventies.

Whatever Women's Rights may be, Mothers Rights ruled supreme, with their wooden spoon sceptres and their castles their homes.

So when she told me what to do - which was to take this tablet, this bright red, shiny and very round tablet, and to ingest it after my breakfast, but before going to school - I took the tablet.

"It says that it is chewable," she offered, as she proffered the orb.

It was neither chewable nor swallowable.  Forces external to my body rejected it, all moisture was sucked from my mouth and the red shell cracked and mixed with whatever chemistry was left.

That being said, she had allowed me to choose my clothing.  She was a fair and smart mother for making such a compromise.

I had just ONE item in my wardrobe that I really felt said it was authentically ME when I was that age.

It was so cool.

It was a white t-shirt with silhoettes of buildings with a few bright trees in the foreground, and a lamp-post and the words "Paris" across to one side.

Not so cool that I looked wannabe - it was a little bit too twee for the part of the Seventies I inhabited, with Countdown just getting going with more live music and stuff that Molly Meldrum told us was the "next big things" - but I digress.

She allowed me to choose my clothing, which was my Paris t-shirt and a pair of shorts.  I can't even remember which shorts.

I put it into my mouth - and the subsequent projection was in the form of foam.

I could not stop blubbering the foam out as I looked in panic at my mother. The foam was red.
Really, really red.

And it was like there was a fountain within my mouth flowing down the front of my shirt.

My mother's eyes and mine met.

Me begging her to make this not happen - and her pity for me and regret at being the purveyor of such a curse.

--
It was not the last time she would ever make me throw up in the name of medicine.

It was the last time that I ever saw my Paris t-shirt.

--
Do you want to know the worst bit?

The worst bit was - the tablet was for worms.  The worms that she thought maybe I had, because I was always on the toilet.

The reason that I was always on the toilet was that I was addicted to reading.  It is possible that I had just discovered several years worth of National Geographic - or a good Betty and Veronica - and was slacking off from whatever tasks and chores my parents would allot me if they caught sight of me.

And so I would sit on the pot and read.
--
And now, I am the mother of a similarly afflicted child CALLED Paris.

And for two nights in a row earlier this week, she has "had to go to the toilet" for extended periods after bedtime, because she has got a book.

Not necessarily a good one.  Just any one.

Then yesterday, she got some new technology.  A cereal company was running a promotion over the school holidays, where if you pestered your grand/parent/s enough to get THREE of their SPECIALLY MARKED packs, you could apply online and get a FITNESS TRACKER.

And to put the cherry on top, her stodgy parents ACCEDED TO HER WISHES.

And, as promised, within three weeks she received a BRIGHT RED FITNESS TRACKER.

It is awesome - although I have a feeling it may have its limitations.

She thinks it is AWESOME and will accessorize her school uniform and be AUTHENTICALLY her.

Yes, she is eight, why do you ask?
--
This morning, she was up at half past dark, because she had a book to read.

And she had her new fitness tracker.

And by a quarter-to she-is-usually-being-dragged-out-of-bed-at-this-time, she has "already done 547 steps, Mum".

We then did a scientific experiment.  I got her to walk five steps away and five steps back.  "Now how much" I asked her.

"It'll be good for your maths, then," I joked with her.

She was not amused.

She then spent the next five minutes, on the bog, shaking her arm, occasionally yelling out numbers.
--
Perhaps she has worms? 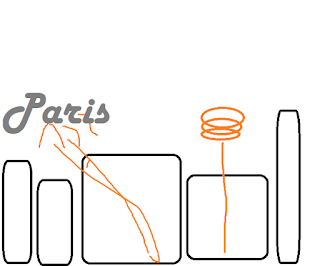 We will never truly know what the Paris t-shirt looked like, but one thing is for sure - it didn't look much like this at all...
Posted by jeanie 5 comments Links to this post