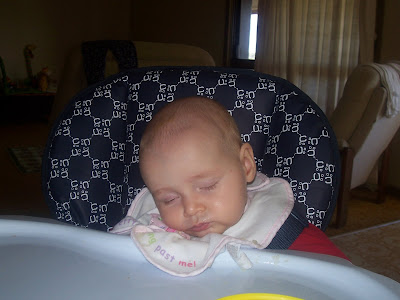 The kid is a fast learner. She's got her priorities straight, too.

Just love photos of them crashing and burning sitting in their high chair! Love it.
Go you with the daytime routine solution.
It just gets harder with subsequent babies to keep daytime routines when you have bigger kids to collect or take places, etc etc.

I remember these days. So very sweet your Paris. I appreciate your sharing her with us! Love ya Jeanie!

Oh wee Paris - precious little love. Give her a cuddle from me.

Yay for all of you!

All I can say is it's a good thing I no longer have ovaries, because that cute little napper would have them screaming more! more!

Oh, I do remember those days. I always assumed I was going to be in control. Someone had other plans... She is still so adorable xxxx

So cute! That picture just made me 'awww' out loud! xx