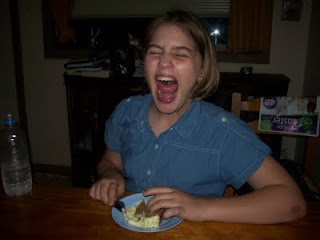 Oh my goodness - I thought it had been a little while since I had blogged, but it has been BIG while, hasn't it?

It just seems my free time in front of this thing is about nada - most mornings I am up and out of the house by 7.30am, my getting back time until flop time is fairly filled with activities around getting the girls fed, clothed, clean and cosy.

I do, on occasion, check one or two blogs - with comments these days I am very slack!! Generally, though, I try to spend a bit of time with V or just collapse.

Mind you, we have had time to all come down with gastro a short while ago - and I am planning on having a holiday from work when school holidays come around in four weeks (my first PAID holiday since 1992 - woo hoo) and actually doing fun stuff with my family. 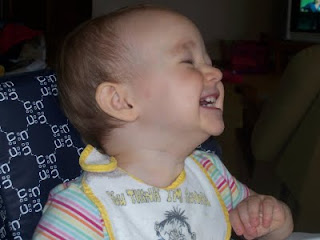 Getting my groove back

Ah, and I truly wish that it was of the creative and bloggity blog variety...

It may well be I will get my sewing groove back next week when my beautiful mother comes to visit and find my birthday present with me.

And one day I will get my beauty queen groove back, because my sister gave me some Pamper Yourself (with a facial and a pedicure) vouchers for the same occasion (it a few weeks ago - I snuck it by).

But I can assure you that the cranky-butt induced-by-bureacracy groove got a great workout yesterday...

Let me set the scene.


Recently, we have had a spate of Public Holidays - which is actually relevant to the story.

On the Tuesday post the long long weekend held for my birthday containing both Easter and Anzac Day, I discovered that the biggest bureacracy in the country (known hereabouts as "The Evil Empire") wanted to see a document, and by the tone of the letter, they wanted to see it NOW. Of course, NOW is relative, as it had been sent by the office in the nearest town via an office in Sydney, and dated just prior to the long long weekend - so 5 days of my "NOW" deadline was already in the gray.

So they wanted to see it very soon - and given that I have several jobs that pay by the hour (and bosses that want me to work the hours I am slated to do) PLUS another long weekend shoving all of my slated hours into continuous slog during all of their opening hours, I had to delay my fulfilment of their demand until yesterday when I could spare a half hour between jobs.

One of the problems with going in to the offices of EE is the congregation of other patrons who brings out the hidden snob within me (and possibly of us all). I am sure if there was a one-way mirror opportunity there would be HOURS of fun in just looking at the masses and working out who was there due to bad luck, who was there because due to circumstance and who was there as a career path... Unfortunately they haven't yet tapped into the money making opportunity such voyeurism offers, and therefore they seek fun in putting stressed cranky cows into the mix.

Another of the downsides is there is always a queue. It seemed innocuous - there were only about 7 people between the end and the other end when I was directed to join it and there were 2 people serving. Logically, that should inspire hope - unfortunately, logic (and indeed hope) are not options that were budgeted...

While the 7 people inching encrutiatingly towards the end goal were an irritation, the folk being funnelled into the line behind me were - well, let me just say that had the queue been a dark alley, I would have looked around for the cast of CSI to join us...

How long should it take 2 people to serve 7 people, do you think?

No, I wouldn't have thought over half an hour either - by which time, my allotted "between 2 jobs" free time was fast running through the glass - but I was at the head of the line (which now contained over 20 people to my rear) - and so it was with a degree of joy that I greeted the counter clerk with a hale "hooray, lucky this is an easy job - per the letter, here is the document, take your copy and I will begone in a jiffy" - well, I may not have used those EXACT words, but be assured, my greeting was upbeat and perhaps a contrast to the atmosphere.

It was obvious from the outset that such an attitude created quite some confusion with the clerk, and it seemed to the detriment of the whole process - so used to a snarl and a thrust of problems, she decided that the situation needed a few problems inserted into it.

"You need to take a seat over there and wait for someone to see you." she told me.

Now, I have been reading for a few years now, and nowhere in the missive I had been posted did it say "come in and we will waste your time for you" - had it done so, I would have wasted a few hours (possibly paid - I can multi-skill, especially when all but 5 minutes of that time would be on hold) to their call centre and made an appointment - because that is what people do when they don't have time to waste.

I told her no - it may be that I said it in a tone that she was more comfortable with, rather than the joviality that had set her astir in the first place - but she was not to be appeased.

On the letter, there was an option of sending the document to the office that I was standing in, so I asked if it were possible then to do this? Unfortunately I had stirred the power-dragon of bureacracy concealed within her meek demeanour, and set upon wasting my precious moments was she and denied that the letter would allow her to use such an initiative.

At an impasse, a passing clerk offered the alternative of giving me an envelope so that I could post the document to them - which was found and passed over to me with a dismissive gesture.

Now the truly curious thing? The envelope (reply paid - thank you EE) was addressed to a different address to the office I had been in - indeed, it was not even the office that had passed the letter through to me, but a third.

But you know what? I got them in the end. Oh yes, I had to write a cover letter for it - and I am the Queen of Passive Aggressive letter writers.
Posted by jeanie 7 comments Links to this post