If you lived inside my head, you would automatically say the above to the tune of "Bob the Builder" - as it is a tune that has been heard several times today, and therefore is on high-rotation repeat.  Ah the joys.

I do not have the photos to prove it, but as well as the bumper basil crop I am dealing with here, there is a cayenne bush* that is as prolific.

In search of recipes that use vast quantities of cayenne peppers, I did discover Mom's Cafe Home Cooking, where she tweaked Frank's RedHot Original Cayenne Pepper Sauce Copycat Recipe.

The first time I did this recipe, I used 20 red chillies (I actually harvested over 100 chillies that round - I also made a VERY hot sweet chilli sauce and an unpalatable chilli oil), minced garlic, salt and vinegar - and boiled for about 1.5 hours, so only got a small bottle of intensely concentrated sauce that V declared "as good as Tabasco".

The last harvest that I did yielded 40 chillies, of which only a half dozen were red - so I decided today to try for a "verde" variety. 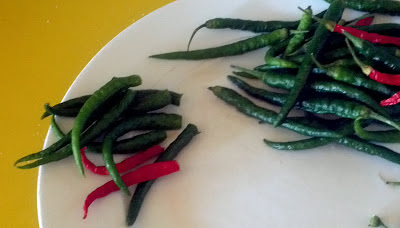 Per the original instructions, I chopped the stems off - the original called for aged, so the few days on the window sill was "preparation" and not "procrastination" 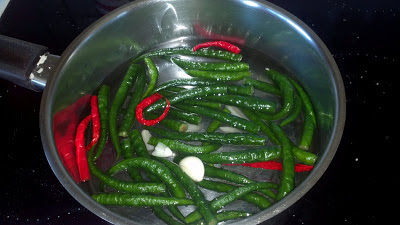 I put these into a saucepan with a few good pinches of salt, 6 cloves of Australian Garlic ** and as much white vinegar as I had on hand in the kitchen *** - about 3 1/2 cups.

I then brought it to the boil and simmered it for about 45 minutes (as we had someone coming for dinner and I didn't want the gravy getting mixed up with the hot sauce and causing conniptions). 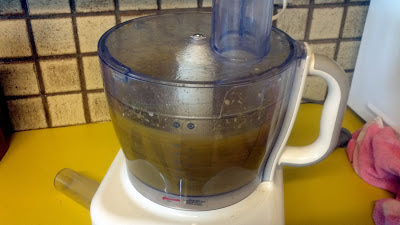 I then chucked it all into the food processor and gave it a good whizz. 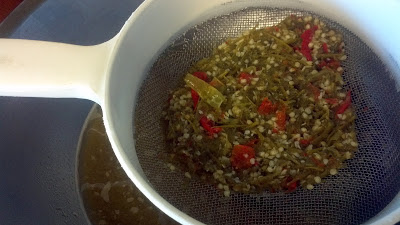 Then sieved it and jarred it - voila. 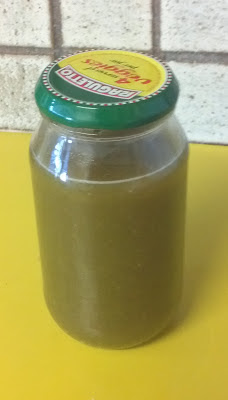 I have had a preliminary tip-of-the-finger-taste-test - It ticks the "blow your cotton socks off" box, but without that "water, water, I need water" finish.  The proof, of course, will be in the rate of usage by the V man.

As this is Friday, I am linking this up at Mummy's Undeserved Blessings  weekly recipe round up.

So - do you have any good recipes for me to test on the crop next go around?

* To add to the cayenne bush's wonder, it was one of a 50c punnet in the sadly unloved and neglected "take these home or we will turf them" section at the local hardware.  I love a bargain that works...

** Australian Garlic (I have to specify, as getting the domestic product is as rare as hens teeth, and unless you find a good farmers market the supermarket believes it is selling you gold).  I do believe I have refrained from political rants in the past, and will continue to do so but press the button and I can give you a good garlic diatribe.

*** I could have used my legs and got some more from the laundry - I am a Shannon Lush devotee, and so Bicarb and Vinegar are used in a variety of rooms for a variety of tasks.
Posted by jeanie

What is the difference between Australian garlic and non-Australian?
I like to use cayennes to make what we call "pepper sauce", basically you stuff them in a small jar, and cover with vinegar. Let it sit for a couple of weeks, then use the vinegar on cooked greens (turnips, mustards and collards) or on cooked dried peas like black-eyed or crowders. The pepper sauce jars are tall and skinny, with a little hole in the top to make it easy to dribble it on the food. When the vinegar is used up, you just put some more in the jar. The peppers get changed out once a year or so, when the new crop comes in.

I love Australian garlic too. We refuse to eat Chinese garlic - it tastes so bland. (And there've been cases where it was fertilised with human poo)

I love salsa - onions and capsicums and tomatoes, cilantro, and then throw in a couple chiles or three until it is hot enough. I read a thing once about drying chilies. Just take a needle and thread and stab them with a needle and pull the thread through. You wind up with ropes of chiles that can be left to dry and then hung in your kitchen so that you can simply pull off a chili or two when you wish to give something a bit more bite.