When 'Salina was a baby, I met a woman who has been an extra-special friend to me ever since. At the time, she gave me a line I often quote.

Obviously, I forgot this principle when going for the second-time-around motherhood lark, and while we aren't there yet, the threat is looming.

Right now, however, I still advise everyone I meet that the ideal age gap for siblings is 10 years.

When 'Salina first met V, she asked "are you going to marry my mum and give me a baby sister? I think her name should be Ella."

Anyhow, after a few years, a wedding and a settling in where V and she developed a great relationship, her question lay idle.

When we finally did get the wheels in motion for such a possibility, 'Salina was very non-plussed. She had grown used to having two adults orbiting her star, and the potentiate of a new baby sister (or brother) was not to be contemplated. "Stop talking about it" she requested during gestation. 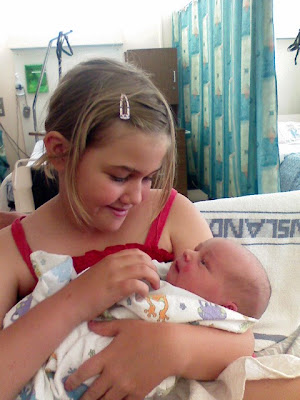 Her holdout lasted about 0 seconds once she laid eyes on Paris. 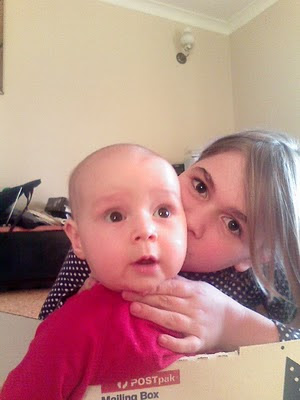 Every time Paris lays eyes on her big sister, she yells out in delight and waves hands and blows kisses. School mornings are not complete without a traditional front door vigil while 'Salina waits for the bus, the afternoons are a great reunion of long lost friends. 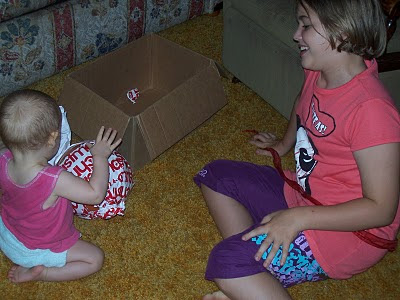 And while 'Salina lives in this limbo of not-quite child, not-yet adolescent, she is delighting in her little sister and her development. She is the first to hold her hand out to help her walk. They talk and play and laugh together - and we don't take enough photos of the joy.

We occasionally see clouds of impending teenagehood - and while we know it is unavoidable, we also know how truly terrible we were as teenagers - and hope to goodness 'Salina is not that bad.

We also get glimpses of the dawning of terrible toddlerdom - and I have memories of where 'Salina frayed during her first coming of age.

But right now - right now, we are nowhere near the hell that could be imagined, and we are very, very glad.
Posted by jeanie 9 comments

The Ides of February

Or rather, fortunately, this is another post with no pictures.


Two weeks ago, Paris did not go to Childcare because - well, I have attempted several times to say it nicely, but there aren't many ways to say "she was a snotty nosed kid".

She only (theoretically) goes two days a week, which is V's two days to get some more study under his belt.

I say theoretically, because by being well enough to go to Childcare last week, she was set to bring her attendance rate up to about 50% for the year.

We (especially V) did a little jig last week when she was well enough to attend. Especially V, because he is at crunch time for his study.

Last Wednesday, I went to collect Paris after work. I don't often get this privelege - it is a task that V and 'Salina tend to bags, mainly because I get home late and they are fretting.

However, due to homework and assignments and me getting an early(ish) card, I got the guernsey.

When I got into her room, she was resting and didn't notice me. Her clothes had been changed, and when I grabbed her bag I saw her old clothes were covered in something yellow. She then noticed me and burst into tears, pleading "bap! bap!" (my sole purpose in her life on occasion, I think) so she and I made a fast getaway.

That evening, we noticed that she looked a little sunburned.

The next day we were sure she had been burned a little by the sun, as it only appeared on her arms from where a t-shirt would have covered down, plus a little at the neckline.

The next evening, we changed our home diagnosis to perhaps being wiped down with something she reacted to, as the "sunburn" was getting a little splotchy.

By Friday, I was worried enough to make a doctor's appointment and call the centre for some background on what may have set off an allergic reaction. I was advised that yellow jelly had been the substance on her clothes, and she had been wiped down with wipes. They also mentioned another child had come down with a rash and was going to the doctor as it looked viral.

The doctor advised that the rash wasn't acting like any viral rash (only on arms, top of one leg and the front of the neck) and it was most likely an allergy.

When I told her I was going to my sister's on the weekend, she told me to have fun, don't worry, and the rash should go away.

Saturday, the rash hadn't gone away but it wasn't bothering her and my sister had a Jeanie-shaped hole in her book-keeping.

My sister reminded me that she was allergic to Dettol and had reacted so badly she ended up blistered - and 'lo, it was true that Paris' spots were starting to blister.

By Sunday evening when we arrived back home, the spots were all turning to blisters, and the clear skin on her legs and lower back were turning to spots, and I thought it might be prudent for another visit to the good doctor and a call to the childcare centre for more indepth information about the wipes.

It appears the wipes were a new brand they didn't regularly use - and as we only use fragrance-free ones or chux it was a possibility.

The doctor mentioned words like "mystery" and called in her colleague, who agreed he had never seen anything quite like it.

On our way to get blood tests and swabs, I rang the childcare centre again to tell them there may be a mystery virus and enquire what the other child was diagnosed with - to be told that TWO children had diagnosed rashes in that room - one with Chickenpox, one with Hand, Foot and Mouth Disease. Nice.

So another phone call to my sister to tell her I have potentially exposed her and her family to highly contagious viruses. Yay.

Have I mentioned how loud and piercing Paris' yell can be? Try that in an echo chamber of a pathology room with two women, a large needle and some vials.

Yesterday, the blisters all turned to scabs, the spots all turned to blisters - and other than the discomfort of trying to crawl on blistered knees, she was fairly fine.

Today we went back to the doctor for diagnosis.

We didn't get one.

We DO know she doesn't have Chickenpox OR Hand, Foot and Mouth Disease.

We DO know that she has had an allergic reaction at some point recently.

The good news is that Paris is still fairly fine.
Posted by jeanie 10 comments