The not so satisfactory update to the drama previous

As is my wont, I stewed and griped about the drama, and a friend (who happens to be both (a) an afficianado of renowned international flatpack furniture retailer as a therapeutic device (as was I in less jaded days) and (b) firmly in the camp of Aye (as were 90% of my respondents)) has offered me a solution.

As he has plans of being in the same town as renowned international flatpack furniture retailer and even, perhaps, visiting said store - he is also willing to collect said bed slats for me.

That news has brightened up both the 12-year-old and the fifty-mumble-year-old females of the household.

So to the computer I hastened.

"Do you still want the product in your basket" it asked helpfully.

Occasionally, some items in your bag may be out of stock when you reach the check-out. If this happens, we apologise for the inconvenience and ask you to try again later."

I bet you do,  renowned international flatpack furniture retailer, I bet you do - but I was cunning, because I had TEN DAYS up my sleeve for them to just TRY to disappoint.  With that lead time, I could let my little girl down lightly or find solutions.

Can you tell how giddy I was at that point in time?  I could almost grasp my little girl's dreams.

When asked for my postcode to offer me options, I valiantly chose "Collect from store $5" (which is a darned-sight more palatable than the $199 for a four hour delivery window in 2 weeks)

Ah, but the sadistic renowned international flatpack furniture retailer got their twist of the knife in at the very next step...

Do you see the problem here?  The date I want is 30 Jan - not even on the page, let alone a dark enough grey for me to select.

Not happy, Jan, not happy.

I have set the alarm for next Thursday - all fingers crossed please.

Parisienne Boudoir (and the dramas therein)

Can you believe Paris is now 12 years old?!

Her birthday was very low-key this year, as the current climate does not lend itself to high-key - and because she got her biggest wish - free rein to upgrade her bedroom.

The page was open at the website of a renowned international flatpack furniture retailer and she got to choose it all - bed base, mattress, pillows, linen, desks, decorations and fripperies.

The downside was that, due to logistics, it would not arrive until three weeks AFTER her birthday!

That three weeks was on Tuesday.  It didn't come due to logistics not accounting for side-tackles by the current pandemic.

It also didn't come on Wednesday, the day I had off from work (per below post).

It did, however, come on Thursday - just as well, as her good mate had been promised a sleepover when said bedroom was assembled and I think that good mate's Dad was particularly sweating on this promise!

So Thursday dawned and the 23 boxes were counted off the truck.  I went to work.  Checked on V and girls during the day - all good, building the bed, girls off devices for a bit (the bane of existence).

That night, all riled to say they got the order wrong, discovered something far more stark.

And to get said slats, it will cost 2-4 times as much as the value of the slats to have them delivered.  And it will take another 3 weeks.

They had the order for SIX EXPLETIVE-DELETED weeks already!!!

Nowhere on my order does it say "By the Way - this BED doesn't have the bits that will make it functional included".

Nowhere in their thrice-weekly sales emails did they say "we noticed that you have bought everything to make the perfect bedroom except for the basis for sound expletive-deleted sleep".

On their website, it does indeed say that you do have to purchase them separately - for some of their beds - but if you select another in the same style, it is included.  Tres confusing.

I did reach out to them today, asking for some sort of solution that didn't involve me swearing and dragging their name through mud.

They sent me a message back this evening which basically told me that it sucks to be me.

So - straw poll - aye if you think that when you buy a bed it should have the actual slats included, or nay if you think it sucks to be me.

Oh, and for those who are naysayers because "renowned international flatpack furniture retailer always says they are separate" - I present evidence. 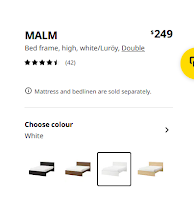 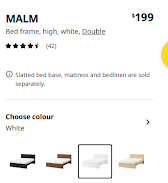 And what is on the order:

Two oh-my Too To!

So yes, obligatory "Happy New Year" from me.  Or quarterly greetings if you don't believe in new years - or indeed happy.

We are certainly living in interesting times.  While watching the news tonight, I realised that there are a lot of people panicking - which is a pretty fair assessment.

It seems the policy of "she's all right", "put your mind to it" and "it won't affect me" may not be the right fit for the current climate.

What a pity we didn't have two years of lived experience and data from the rest of the world to work with and actually prepare for when we dived into the pool.