Apparently a celebrity arrived at (every) Shopping Centre in the local big smoke over the weekend.

I am afraid I am fairly firmly on the "Humbug" side of the ledger when it comes to the whole success story of Santa-marketing strategies.

Don't get me wrong, there are some truly lovely things about Christmas, but they ain't the jolly old man in red malarkey (in my opinion). 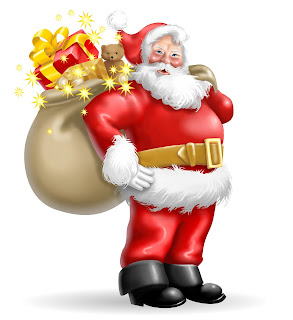 I will tolerate - and I ask that the rest of you tolerate my lack of the enthuse.

Luckily (?) my children have not inherited my attitude.

Don't get me wrong, there will still be no Christmas Cards of my kin on any red-trousered knee.

(Well, there may be, as 'Salina is now a legal voter and she got some other rights thrown in with the birthday as well, so while I may HOPE that there is no knee activity of any sort of Christmas Card she may choose, I have to accept the lot in life that comes with the price.

But I am pretty sure that it will not feature any birds, fire or Santa suits.)

Both of the girls have a terror of the strangers dressed up as Santa.

I am pretty sure that I need NEVER worry about Paris breaching the 4 metre zone around such dangerous creatures - that is not based on intuition, she is quite verbal in what is not an acceptable request even when it has never been (and unlikely to ever be) requested.
I was going to be the mother that was honest with her child and would NEVER foster the fairy-tale, and thus not build the song and dance routine that seems to accompany the whole performance.

Initially, I was unwittingly aided and abetted by my mother-outlaw, Baka, who presented the 13 month old with a "Singing Santa" -it was a scream.  Quite literally.  Salina only had to look in its direction to start screaming, let alone insert the batteries and turn him on to sing and dance along to her hysteria.

I was talked into terrorising her again at two - the only difference is she had really learned to gain control of her reaction and put some POWER into it.  Some other little child thereupon received the joy of Christmas through the delights of the Op Shop after that. 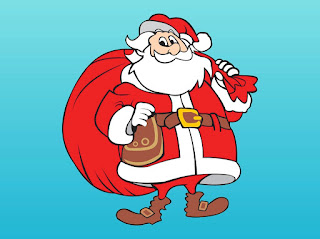 I mean, I know that, as a mother, I will break my children's hearts throughout their childhoods, but that was a very big crossroads moment for this mother to chose the path of least resistance.

As she is the eldest of all of the cousins, 'Salina still "believes" because she knows the true value of Christmas - stay schtum and ye shall receive (the gratitude of my siblings and their spouses) (not me, the original grinch in the beginning of this story - still under this fun loving exterior).
Paris, on the other hand, interrogated me with evidence and theories of the non-existence when she was only 5.

Ever the thinker, she mysteriously changed her tune (after frank and earnest discussions with 'Salina) and I was advised that her new policy would be to believe in whatever I want her to believe.  I think that she too has realised the true value of Christmas - stay schtum and ye shall receive.  She is one of the youngest - she doesn't need gratitude.
And whatever you do, don't get me started on that bloddy Elf on the Shelf.

Out of my way on the 22nd December, folks - that is my designated Christmas shopping day.  Tra-la-expletive-deleted-LA.
Posted by jeanie 3 comments Links to this post