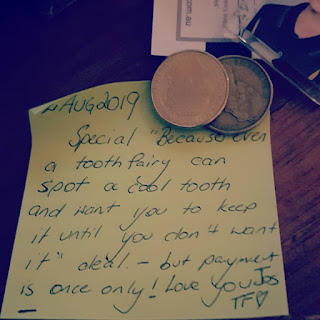 Paris lost another tooth tonight.  The whole tooth fairy business seems to go in waves, and we have been caught somewhat offguard by this third round.  Just when I think I nearly have a handle on this whole motherhood gig, another sideways kneecapping.  Darned Imposter Syndrome!

The new job is going wonderfully well.  Still pinching myself.

There is one downside of my job, however, is the very dry but daily awareness that there are people out there having less than stellar things going on in their lives.

But then, there are diamonds and there are stones everywhere, it seems.

Paris' week, however, has had its fantastic moments - and those in the not so fantastic realm.

She told me tonight about some of the things that may be connected to her bad dreams in the last few nights.

She feels so deeply sometimes.

(Hey, she is now 9 - there are still some things that she feels shallowly or not at all.

And the cover has been blown for longer than she has been alive.

The tooth that fell out tonight was a pretty interesting one.  Whether through natural wear of the movement of position that braces and headgear have wrought, it wasn't as smooth, or indeed as molarish as one would have expected.  And I hope that she will be chuffed that TF recognised this.  And I hope that she knows that TF is on her side toon.
Posted by jeanie 5 comments Links to this post