I am shocking at keeping records on when my second child did anything.

Mainly, I think, because this time around there is another responsible parent around and I figure I did it for the first, it is his job for the second.

That, and my memory just isn't the fireproof-safe it once upon a time was.

So when V asked me tonight "when did Paris first walk", my "umm, around 14 months" wasn't that convincing (especially when I have been claiming her as 16 months for about 8 weeks now - my maths works best in metric and these darned 12 month years trip me up).

However - however, I have sat down with all fingers and toes and worked out that she is FINALLY 16 months old (and 1 day) which, ironically, is EXACTLY the same age as 'Salina was when she was flowergirl at her aunt's wedding.

Of course, that would be a much better comparison if I actually had any photos on my computer of the occasion so you could see the huge difference between the two at that age - but alas, not to be (and while I could go into the office/junk room, hook up the computer to the printer, grab the photo off the dressing table, scan the photo and upload it, we are one day into a 5 day weekend here, and the sloth has set in) so you will have to wait.

In the interim, here is my latest favourite shot. 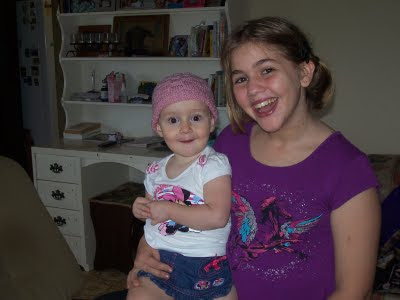 Sometimes you find mirth in the most mysterious places.

Today, I had to do the banking for work - it began to bucket down not 20 seconds before I got there - but that isn't the funny part, that is setting the scene.

So anyhow, drenched and I am racing around town doing the jobs that must get done before I head for home.

Great deal on mince from the butcher's - tick (a very mincy week approaching, family - got a really great deal)

Witchcraft and medicines from the cut price pharmacy - tick

On the way to the fishmonger - my last "to do" on the list, I was listening to the local radio station.

There is a story on it about Black Caviar.

Apparently, Black Caviar is Officially the World’s Best Horse - which I think is covering quite a bit of territory, quite quietly (hey Violet) - but anyhow, that is how she is being touted.

The man being interviewed on the radio was quite adamant.

I think he might have overstepped on that last remark.

Anyone else now got the image of hooves being pushed on buttons worldwide stuck in their minds?
Posted by jeanie 7 comments

Last week, we thought it must be getting close to when we should contemplate harvesting the bananas.

On Saturday, we noticed it was about time to harvest the bananas.

On Sunday, we googled how to harvest the bananas.

On Monday - there was sunshine. There was a pruning saw and much activity. There was sticky, sticky sap, hungry, hungry ants and fat, over-fat bananas.

All those too ripe, we left as fertiliser.

All those ripe but split, we processed and put into the freezer.

All those ripe but not split, we put in the fruit bowl and gave to the neighbours.

All those not quite ripe we have put into reserve and are distributing to workmates, childcare and friends.

At a price of $11.95 kg currently, we have worked out we are incredibly banana rich.

And do you know what?