The Galactical Women's Rant about lurgies and other societal ailments

It has been one of those weeks in Paradise.

One of those weeks that included ailments adjectived with a gender definitive (a.k.a. man flu.  I have been advised - on several occasions - that I have the habit of being a little obscure.  I apologise.)  Yes, I was struck down by a lurgy doing the rounds, 19 times more powerful than the generic offering, apparently.

A query has arisen due to a chance sighting of an advertisement on ABC2 for its Hockey World Cup 2014 coverage - I am quite thrilled for the little sport, don't get me wrong, and I think it is awesome that we can indeed look forward to "every goal" and "our best chance" - but shouldn't it be the Men's Hockey World Cup 2014?  Why is it that every female sport has to be defined by "Women's", and yet events for males are the norm, the accepted, the default?  Why is the major event that Brazil will be holding the "FIFA World Cup", where FIFA doesn't actually designate that its all about boys and balls, and the boob-laden need not contemplate?

Tonight, while aimlessly killing time on the vortex, a local business offered its advertisement for the upcoming State of Origin football game.  Its a pretty big thing, it would make such a business a lot of money if they put together the right options for punters to partake of their services during the duration.  Allow me to present to you their ad. 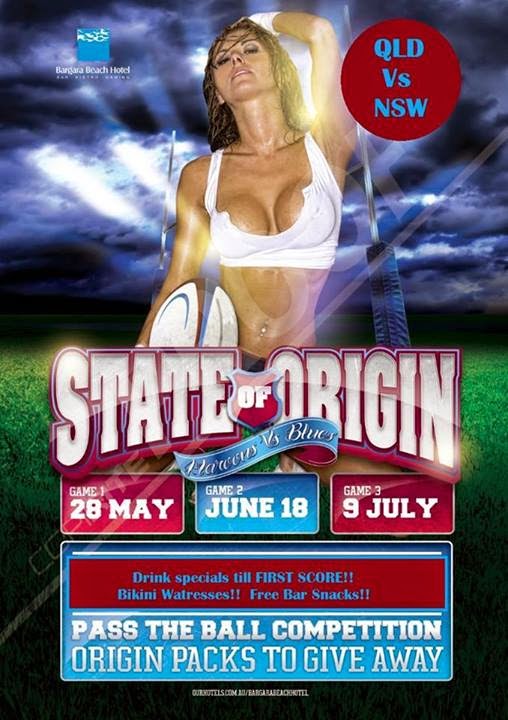 Now, the first thing that stands out to me is that this is obviously all about football, and offering the opportunity to infuse yourself of the testosterone of grown men in uniforms getting all sweaty and pumped by the sheer adrenalin of representing your state by throwing and kicking around leather-enclosed air between two theoretical lines and a few posts.  You read that too, don't you?

(Heads up.  That was slightly sarcastic.)

I actually really hope that this small local business has a good and profitable evening, but I am so very, very, very disappointed that this was the promotion that they ran with.

Just because we have politicians getting all scary with their fearmongering and assumption of public stupidity and ever so "what-the" close to fascist behaviour, why do little businesses - and indeed big businesses - feel the need to suddenly denigrate women like its 1974 and emancipation was just another word for getting the boobs out and all act like it is a great big joke?

Bikini Girls!!??  Its fucking May (apologies for swearing, Mum).  While we are in a fairly balmy part of the world doesn't mean that the month prior to Winter may have a tendency to be on the nip side of comfortable to be frolicking after dark in approximately lord knows how many how many square centimetres of fabric * covering your privates for no other reason than to be a star attraction at something that is meant to be about football.  Men's football, if you haven't yet worked out the modern world's apparent lack of need for defining what sort of athletic event you are in for.

Still, I hope they do well.  We ourselves shall be having our traditional junk food for Origin night festival of Men's football at home again this year.  With all respectfully attired attendees, thank you very much.

But this week did indeed get me thinking.  I shouldn't get sick so often.  It puts notions into my silly little head, and I forget what we all have learned to accept as the norm.

While wondering about the scope of such competitive thing, World Series when it only one nation competes, Miss and Mr World only for humans, Mr and Miss Universe only for earthlings...


* "how many square centimetres of fabric in a bikini" was indeed googled to see if this question had an easy answer.  The answer was this: 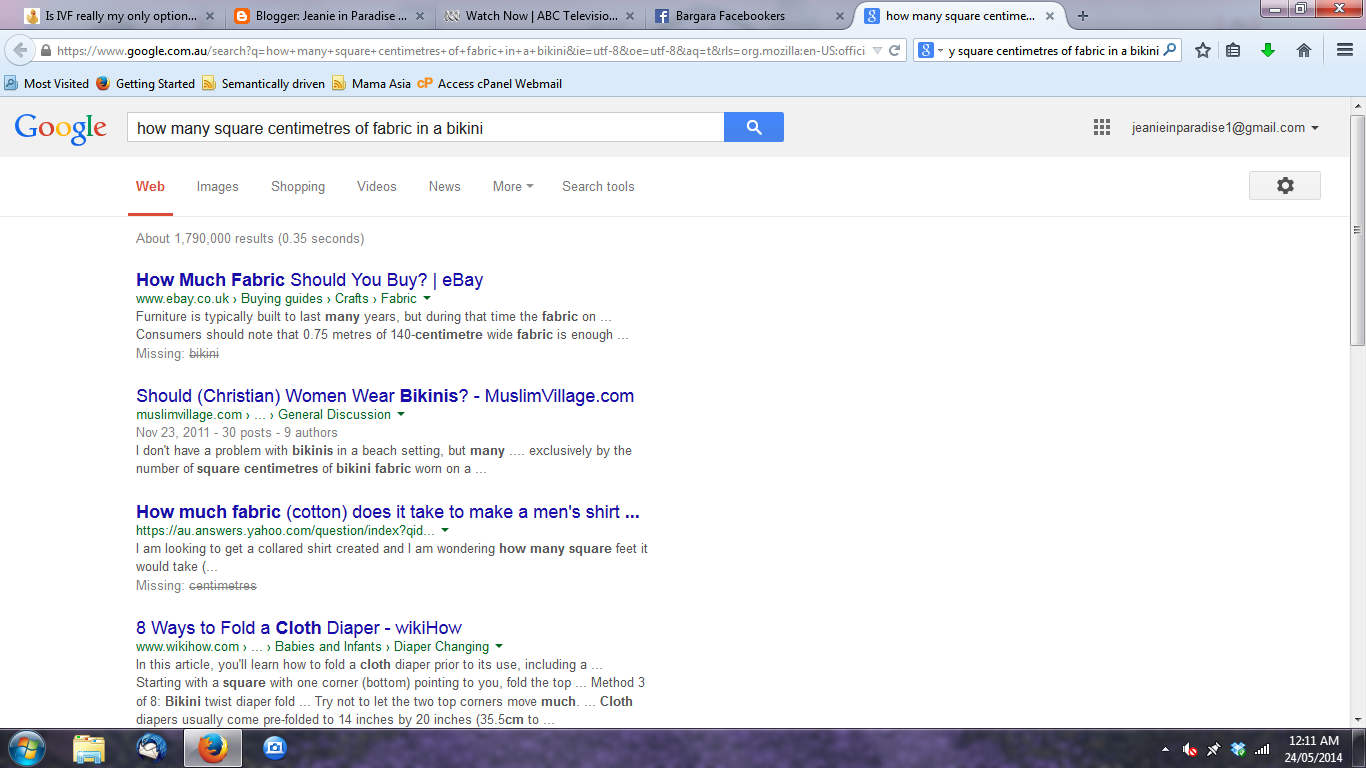 then I realised that if anyone ever googles "how many square centimetres of fabric in a bikini" to find the easy answer, this blog post will a possibility.  Who are these people who google such things?
Posted by jeanie

Being fairly cynical and sarcastic myself, it seldom goes over my head. So....I really enjoyed this post.

It's not just football or sports, either. Check out car ads.

The convoluted ponderings of a fevered mind....

i love your feverish ramblings - but some excellent points there about women's sport, and women's boobs in promoting men's sport.
so for all those young'uns out there who don't believe we need feminism any more...yeah right.

Random thoughts indeed , I rant too about toxic ads.
What were they thinking - any spouse would rip those posters down.

I don't even know the score.
I could care less about most sport unless my boys are playing or it's about running.