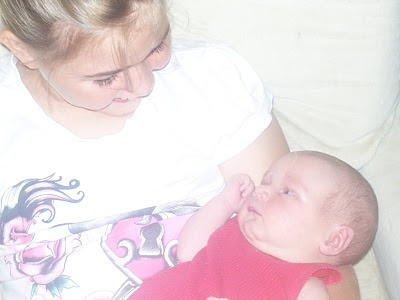 Note to Jeanie - when you end a post with a picture of those breathtakingly beautiful girls, all of the words that make up said post will be instantly forgotten.

Irregular or not - it's great to hear from you and your gorgeous little people. :-)

And yes, sit on for dinner and I reckon they know !!!!

Happy New Year to you too !!

I would hardly have expected you to post daily, you mad thing! Oh LOOK how she is growing... I NEED to cuddle her soon. AND that biog sister of hers too.
Hugs
BB

so much love to you all, xxxx

I thought howling all night was what you were SUPPOSED to do on New Years Eve...at least when you're young. (Not us we crashed two time zones too early zzzz.)

Thanks for taking time out of the UNroutine to share a photo of your young ladies. Wonderful changes in both. Grab sleep when you can get it and try to enjoy the ride. Heh.

Gees. I don't think a one of us here expects you to blog every day. Or even every week. We figure that your focus is elsewhere at this point. As it needs to be.

I love that baby's chin. Oh, my gosh. Oh my goodness. I want to cuddle that baby.

*knocks BB to the side*

Shove over, Jayne, it's my turn to hold the baby. And for the good Lord's sake, don't let Novel Woman hold her...she'll nibble on the baby's toes. And watch yourself, because BB will certainly be trying to pull rank on us, what with the blood relative stuff.

That last photo is priceless. There is nothing better is there? I have not been a good blogger lately. So much to do, so little time.

Dear Deb... you can nibble all you like. I get her for real later next week and I shall HOG her to my heart's content...
*smirks*
:-)
BB

I want to know where are you people fighting over the chance to hold her at 2 in the morning, huh?

LOL. Since your two am is our 10 AM here, I was wide awake, and completely game for baby holding. Didn't you see me there?

Stand in line, ladies. I want to nuzzle that baby's neck, nibble her tiny feet and blow raspberries on her tummy. Oooh, she reminds me of my third baby, who weighed over 11 pounds at birth (didn't want to tell you that until after you'd had her. Wasn't that nice of me?)