Yesterday was a big of an interesting day. Not bloggable interesting, but more a "lets see how different stimuli act in this test" type of interesting.

Anyhow, part of the experimentation that went on was me trying to think of healthy, edible alternatives for the girls for weekend lunches... I was so "involved" in the experiment that I even went so far as to whip up a batch of cheese and vegetable muffins.

There is a VERY good reason that you don't see any results here in picture form, and that is because they TRULY SUCKED.

They were dry, crumbly (a very brave V did say that they were tasty, but he had to swallow several times to get the words out - they were so dry, they didn't just have liquid deficiency, they created a liquid vacuum) and I spat the dummy (unfortunately not the first dummy-spit I had - nor the last - yesterday).

The girls ended up with toasted ham, tomato and cheese sandwiches for lunch. I make a mean toastie - obviously far more proficient than muffin maker.

So last night, the quiche I had envisaged got a unique crust - made of crumbed cheese and vegetable muffin - and was based on a lorraine recipe - so cream (okay, it was Philly light - but nearly cream) and bacon made an appearance - as did all of our vegetables because I was darned if we were going to go without a bit of time down at the front and it meant our whole meal could be in one pan cooking while we took advantage of the good weather.

I didn't take a photo of the beginning of the meal (mainly because my third dummy-spit of the day had just been incited courtesy of a child's carseat - don't ask) (and the wine still hadn't kicked in) and it crumbled into a million tiny pieces on the plate...

However - it was a success, because the crust was delicious (very rich - but will tweak the cheese and vegetable muffin mix and try again one day) and both girls ate enough to tick the vegetable quota boxes.

(Fear of my dummy-spits played no part in that, I have been assured). 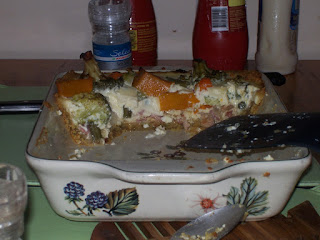 It still looks disgusting, though!!
Posted by jeanie

Okay. What is a dummy spit?

I stumbled across this and it made me laugh like crazy.

To make you feel better about your disaster quiche, might I suggest:

http://www.lileks.com/institute/gallery/index.html aka "The Gallery of Regrettable Food"

as long as it tasted good what does it matter?
PS I'm relieved to know I'm not the only one spitting the dummy ;)

Debby - a dummy spit is something a baby does when it is chucking a wobbly. It is similar in adults. That website was very interesting - I loved the Kelloggs Kaffee ad!

Shish - thank you, I appreciate diners who can understand that.

I don't feel so bad now , thanks !
I have made some meals that look much less appetising than they taste.
It looks yum to me.

I thought a dummy spit is what an adult did - when they acted like a baby ...
I am probably wrong.

Love it when you spit the dummy - sorry, but you could be in the Olympics for it. (Is that something a loving sister can say and get away with?)

Also, how come even your disaster dishes always taste great? One of life's major mysteries. My disasters sneak up on you - look okay and taste like hell.
♥
BB