Oh my, we all slept in a little late this morning! (Thank you, television gods, for putting funny shows on just when we really need to go to bed.)

I waved V off to work and stumbled assiduously started my morning routine.

'Salina slept through until I thought I would have to drag her out of bed, but she did rise when I was in the laundry putting washing on.

"What time did you get up, darling?" I asked her.

"7.20" she replied, and that is when my perfect world unravelled before me because we both glanced up to the living room clock - which said "7.15".


See, I like my mummy-free time in the evenings, and to assist in getting as much quality from those precious hours, I am ever so slightly sneaky.

'Salina's bedtime is 7.30-8.00 most nights, but sometimes stretches to 8.30. To not have her bedtime encroach too much into the territory of mummy-free time, I have called upon technological assistance. Yes, I am the mother who has the clock in her daughter's room set 10 minutes fast.


'Salina went back into her room to see what had occurred. Was it time travel? Is there a warp between rooms of the house.

Perplexed, she came in to the kitchen where I had hidden myself from interrogation I was attending to the morning routine.

The kitchen clocks (stove and radio) both said 7.18 by this time. It was messing with her mind.

"Which clock is wrong?" she wondered.

As she wandered back through the house gathering data, I knew that I had to think fast or my deviousness would be uncovered.

"Its April Fools Day, honey, better watch out your classmates don't trick you." I said, warming up. "Don't believe anything this morning."

"Oh yeah." she said, and I hoped her mind had turned to creating plans herself.

However, darn it, the girl has a worry on her mind, and she did the circuit of the clocks again.

"Virgin Blue are offering no-seat tickets today as a trick in the paper." I said brightly. "People do all sorts of strange things."

"Oh yeah." she said as she ate her breakfast, but I could see her thoughts were still on the interesting case of missing minutes (or was that my overactive guilt centre at work?)

"People even change the clocks for a laugh." I offered desperately.


Darn, so I have now April Fooled myself of that ten minutes of freedom a night. Not a lot in a day, but it adds up to 2 1/2 days a year! 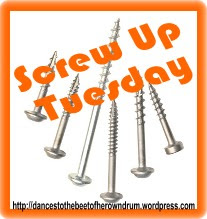 Edited to add that Bettina at Dances to the Beet of her own Drum has the inaugural Screw Up Tuesday today, so I have linked there. I think this fits the criteria?
Posted by jeanie

Thanks for joining in.

The Miss of Abyss said...

Yep, that qualifies as a screw up of monumental proportions. :)

I bet you would have been the type of camp instructor that wouldn't let the kids have watches out on bivouac, and then changed their own watch to be 2 hours later than it really was!!

I think you've done well to have gotten away with your 10 mins discrepancy for this long!! My kids would have sprung me a long time ago by wandering out to the kitchen to get a drink or tell me something they'd forgotten to tell me ....

I'm still ticked that mine figured out that the car clock is set 10 mins early!

I *heart* it when the clocks are 10 minutes early. True.

Tim did that to me for a while. So I adjusted to that. Then we lost power one day. He reset the clock to the right time. That, THAT was a screw-up of monumental proportions! A major wrench in the works.

LOL, that was a good one. I love the desperate attempt to divert her attention elsewhere.