Doesn't have quite the same ring to it as the original that I have modified to suit current conditions.

Poor Eddie is crossing his legs and climbing the walls because I am the sort of horrible cat owner that follows the "while the sky is dark the cat is in" rule. He does have kitty litter and the birds need to waken before I let the domestic tiger out. I think he might be getting a little slow for the birds, but its not something I am going to test.

Unfortunately, its not the cat who woke me. I don't know what time it was I actually awakened, but my mind started immediately to gnaw away on worries a week away and worked its way back until I threw my (metaphorical) hands in the air and cried "enough".

I would like to blame baby, but although I feel it a fair thing to throw aches, twinges, farts and forgetfulness into baby's lap, it probably isn't justified to give it the full responsibility of this morning - given that I have struggled with insomnia for years.

Anyhow - the baby update is STILL lying sideways, more a scrabbler than a kicker and getting darned heavy whichever way I lie in bed.

Not much to add - one upside to insomnia is all the extra hours to dedicate to making a to-do list, so I am off to concoct one SO MUCH BETTER than yesterday's.

Cue photos from last week for the curious. 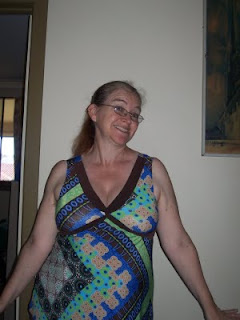 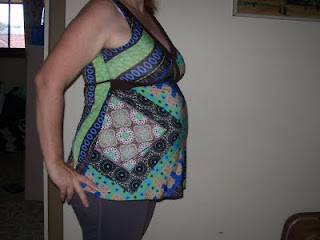 You wouldn't be talking about me, now, wouldja?

By the way, completely forgot to say: You look quite mom-ly, and Jeanie? You look very, very happy.

You look lovely darling - will send you some we took the other day (you recall, when the Granite Glen motel opened for business?).

You look terrific! Kitty will survive your meanness. :)

I HATED it when the baby was sideways. It felt like he/she would kick my ribs out. Drinking cold beverages made it worse. I think the coldness ended up right over the little tush. I'll bet big sister is excited to have a pink little sibling in the near future.

And what a beautiful bump.

He you look pretty wonderful there, Miss J. Loving tht bump, it's starting to look like a REAL one :)

You are seriously *glowing*. How wonderful!

At least with the baby lying sideways you can always feel it! I'm loving your bump but I'm not envious of you! Betcha there is a lot of movin' and groovin' in that bump of yours...

(Great that you've 'outed' yourself too btw.)

Love the belly pic!! Maybe Eddie is preparing you for what the little one to be will do. Love ya!

PS: How funny! My word verification is exernize - maybe you need some walking around :)

You look great and your bump is gorgeous! I hope the little one moves for you soon.

Way cool maternity top, tres chic. Oh my this makes it all so real. I'm very excited for you.

Hey that's you! You look wonderful and for that I have sent you an award.....

You are looking fabulous :)