My formative musical years in Toto-lity

One of our Wednesday nights rituals here is watching Spicks and Specks.

V is a whizz at most of the trivia served up, having been immersed in musical culture from a very early age. I am okay at bits of it - mainly the trivial - but there are large gaps in my knowledge even though I may have lived through the eras that are represented.

But do I ever feel dumb about this? Not really (well, not unless it is THAT WEDNESDAY that hasn't come along for a few months now) because I have an inescapeable excuse.

I can blame my upbringing.

See, while others may have grooved out to their parents extensive album collections (like V did) there was a theme running through Mum and Dad's records that didn't exactly trill "seventies style". On the upside, any Charley Pride or Val Doonican songs ever featured on SnS are a shoo in for me. 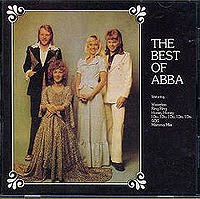 Don't take too much pity on me - after all, there were occasional glimpses of life in the outside world - "The Best of Abba" did come into the family home (this shot is 1 side of the album - the side Mum chose to display - the other side was Dad's favourite - anyone remember why?)

We did get exposure to some exceptional tomes, don't get me wrong. When our next door neighbour married, he married well - a girl with a Hot Chocolate album in her collection. My uncle's marriage brought a fantastic aunt - and some compliations that mean bubble gum music is not a completely foreign concept.

Unfortunately there were not enough eligible local bachelors nor enough funky city chicks marrying them to mean that my grassroots understanding of hip culture was all encompassing (man, I have dyslexia this morning - that came out as emcomappsing first go round).

If I had to rely on the local media I was up the creek.

Countdown was accessible via the television station we could receive (in a very grainy grey, it must be admitted. I thought Big Bird was grey for years!) but only available if we could fool our parents into letting us turn on the TV slightly earlier than the news - that was not always as easy a task as it sounds.

The local radio station had a rather limited budget, and tended to buy 1 album a year - I remember the year that they invested in Toto (and see, I always thought that the album must have been called "Africa" - its not, its Toto IV).

I just checked the Wikipedia entry on the song and had to laugh to read this:

Without a doubt Toto’s most recognizable song, "Africa" was almost omitted from the Toto IV record prior to its release. Having spent a great amount of time producing the tune, the band became so tired of the song that they didn’t want it on the album.

Without further ado, here is the earworm that defined that year for me:

Another year George Michael got the guernsey. Anyone up for a rendition of "Last Christmas"? No, me either.

The good news is that the decades after I have managed to track down and bone up on my lack of education in these areas and don't appear to be too strange when matters wander onto pop culture during that era. I can fudge it pretty well, and even manage to answer some questions and appear somewhat knowledgeable. (A secret I have just exposed - I am fairly competitive when it comes to fluff)

However, if I occasionally look at you a little strangely when you ask me to hum the opening lines to "Can't Get it out of My Head" by ELO, its because there are bits of my youth I cannot recreate (but I can tell you what ELO stands for).

When was your musical awakening? And have you ever been hip?
Posted by jeanie

Oh I LOVED that album! I remember driving from Sydney to the Gold Coast playing my "Toto IV" cassette the entire way!

Africa was my fave song, of course!

Everything ABBA was the sound track to my life as a new mom. My kids know all the words by osmosis. (Can you hear the drums, Fernando?) If I remember right the back side of that album had something to do with bright red hot pants, The seventies were SO well known for good taste in clothes. :D

It was the Bay City Rollers for me lol.
Loved "Africa" could sing it in my sleep :P

No. I was never hip. Although now I have a pair of them, and rue them.

My first records were 45s. My first was Rare Earth's "I Just Want to Celebrate". My first album was Emerson Lake and Palmer's 'Trilogy'. My first eight track was Queen's 'A Night at the Opera'. Eight track was in and out before I got much of a collection. I remember riding up our dirt road on my bicycle with 'Revolution' by the Beatles blasting out from my little transistor, which I dearly loved, because I could take it anywhere and not have my father bellowing about my musical tastes. Gosh. I'm inspired to write my own post.

The first music that I discovered on my own was Fleetwood Mac (Rumors). It totally blew me away.

Mine was ABBA. I remember my dad coming home the day before the new school year in '77. I was going to be a big Prep student and Dad presented us with that very same album. I loved 'Honey, Honey' and 'I do, I do , I do....'

I can't remember the otherside though...oh yes I can. The girls are sitting down with the blokes behind them and the girls kinda have their big cleaves showing and short mini dresses on. Am I right?

Vienna by Untravox. Changed the way I listen to music.

Defining? Acoustic guitar live. Still spins me right around inside out.

Oh God how good was Countdown....an aussie icon for sure. I have so many musical memories I can't even begin to name them....

Ha hah hah... you are taking me down memory road here, dear sister! Don't you want to dwell on how we would belt out "I like Beer" in the back seat of the Valiant station wagon? (Tom T Hall fans will know where I am coming from!). Or how bout "The Chrystal Chandalier"?? Are you squirming??

Fe - I too remember car trips with that song blaring - courtesy of our local ABC.

Leenie - yes, you would never guess the reputation of the 70s from the side that is shown, would you!!

Jayne - the local station never got BCR - in fact, I was fairly much a BCR virgin until the late 80s.

Debby - I am looking forward to your post - and 8 tracks were cool. My mum had one we all played with.

Mama Zen - I discovered Fleetwood Mac courtesy through the same lady who delivered us Hot Chocolate - she was SOOO cool.

Melody - you are right. Bushbabe and I had many a hairbrush concert with ABBA as our backing singers.

Rhubarb Whine - Ultravox falls into the gaps of knowledge for me. Sad, I know.

Farmers Wife - how many of us mentally go into the drum sequence before the final Countdown when we see the logo/hear the word?

Bush Babe - only when the memory of baby brother's head lolling about between us gets too uncomfortable. Kids do love Abba!!

That ABBA album? My dad bought that for my mum when I was born.