Paris woke him at 5.30 (not because it is his birthday but because she sneaks into our bed between 3 and 4 and then commences wriggling until one of us arises, at which point she smiles and advises that she is awake too).

It is a stinking hot day here today - relatively, of course.  The maximum is 33, which is about exactly what the temperature has probably been for the last week and will be for the next, but it is as humid as a sauna and has been since - well, since 6.30, which is when I slept in until (and tagged him on the whole "entertain Paris" role that is our main task at hand these days). 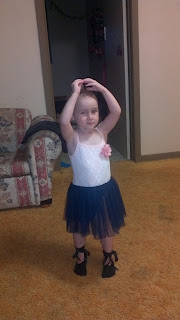 He got phone calls, but missed the one from 'Salina (got a message on MessageBank, but she didn't sing Happy Birthday, which is mandatory, so we will be following that up later).

We went to the beach - that in itself wasn't onerous at all - but while discussing our strategy (involving who was on "entertain Paris" duty, which is more about wrangling between the flags than actually dealing with whine while on the beach - a pleasant change) a wave caught him unawares just at the bit that causes the bottom bit of knee to wobble around against the top bit of knee, and when there is nothing in between those bits of knees this can cause something close to excrutiation!

Due to a upcoming opportunity, I have need to visit a particular cafe and so I proposed that for lunch, (rather than having the "toasted leftover wraps" that I do so well).

We all dressed up - well, Paris dressed up (in tutu and sparkly shirt) and I matched her (although my tutu was more of a maxi-skirt, but we were both, coincidentally, in pink and white - although as Paris did point out, I didn't have any silver stars), and V - well, he wore a shirt and boardies (which is his daily uniform) - and worked on a plan.

We first visited the library, and despite me having the forethought to reserve rather than contemplate the sifting through the DVDs to find the last series of Hamish Macbeth for our viewing pleasure, it hadn't yet been acted on so we still had to do the sift - more sand in the shoe than total devastation.

Then we hit the main drag to find the cafe - after one circuit to locate the cafe without luck in either parking or location (side note - why don't businesses put the street numbers on display?), we brought in technology to try and find it for us - and I am blaming shortcomings in the technology for the first block's walk with a three year old and a V with a gammy  knee on it fooling me (and definitely not on the whole "the map was upside down" suggestion that V may have made).  After asking the local constabulary (much more reliable than technology) we walked back to find that the cafe was tiny and choc a block with patrons.

We thought we might overcome that by getting a counter-ie at the revamped pub on the corner - to discover that they too were well patronised and nary a table to be had.  The fact that a large tableful of people from the establishment that deviated from employing me fairly recently sealed the fact that we weren't going to wait around for an opening.

Luckily, the complete lack of battery made itself known in our driveway, so V still got to the shops for dinner items AND got to have the RACQ come visit us and recommend the abovementioned car battery charger...
Paris and I set about making his birthday cake - the old favourite, Moist Chocolate Cake by Stay at Home Mum.  Do you know what a difference it makes if you read 1 1/4 as 1 3/4 when you are looking at the sugar? 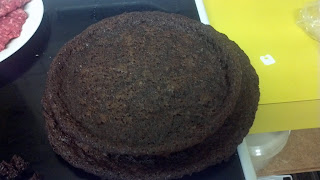 Yeah - not recommended.
On the whole, though, he did say that he enjoyed the day.  Isn't he sweet?  Happy birthday darling - and next year its going to be different.  Isn't it?

Happy Birthday V... you KNOW that made a much better blog post, don't you? Trying to imagine Salina coughing up a 'Happy Birthday' and failing. Maybe when she's home?
♥
BB

Where IS your big girl? On Jillaroo duty?

Yes Debby - you may have noticed her in the background of the Bay Leaf shenanigans on Bush Babe's post yesterday.