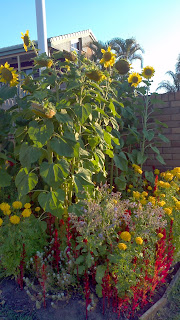 It has been a busy few weeks, as I had intentions of filling this school holidays with things that have been in the pipeline to happen for months if not years.

We visited, we helped, we celebrated, we updated, we winced, we held breaths, we gardened, we pruned, we laughed, we got dirty, we are now home and it was great.

One of the many highlights of our last few weeks was making good on a promise to my Dad.

We, together, he and I, as a team, and got started on his vegie patch.

It is terribly dry right now where he lives.

It is hard to imagine that this area was the headwaters of the worst floods in white man recorded history in this region. 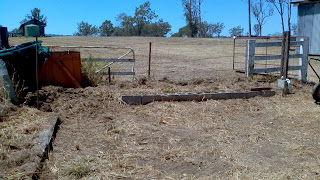 Dad has visions of plentiful vegetable crops.  In terms of tomatoes, citrus and passionfruit, this vision has gone great guns in recent year.

However it seems his philosophy in life and vegetable gardening are not always seeing eye to eye, with the time and motion concepts warped by many an impediment.  Which is where I am to come in.  I am to be his "woo boy" with his bull at a gate methodology, it seems.

Due to being overseas for a long stretch this year, his patch was to start almost from scratch.

Yesterday we started. The whippersnipped lawn of weeds and dust was layered with the plentiful supply of well-rotted horse manure (oh to have a well-rotted horse manure mound at the corner of your patch) where it is envisaged creating a nice circular bed in a future working bee. The pile was saturated and then we placed the unused poly trough over it, both solving a storage solution and hopefully speeding up the process of sterilising the weed seed. 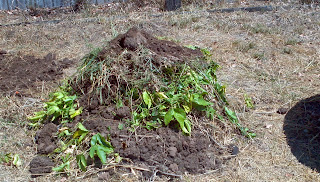 As I said to Dad, my approach to gardening is that of a scientific experiment – if it doesn’t work, you will at least find out what it does. 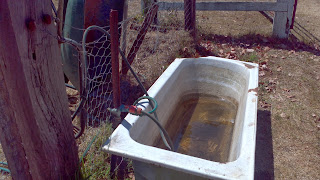 After morning tea, I got him tarted up to go down to the local plant nursery (no, I didn’t photograph this – he is of the school of standards of dress but not of the bloggable moments).

We got cucumber, tomatoes, beetroot, corn, zucchini and lettuce – a fine selection – but I did get into trouble for dragging him in to town all tarted up for such a short job.

We then donned working gear again to fix a problem with his chicken house.

Have I mentioned my father was born early, ran at 7 months and hasn’t actually stopped yet?

Later that afternoon (after a 150km round trip to collect 'Salina), I finally allowed Dad to plant the seedlings. We discussed mulching in depth (ha ha – THAT is a pun, folks – you have to watch for them around here). So we got half a round bale of grass hay (again, serious resources envy – wouldn’t you love a polocrosse carnival to clean up after?) to well and truly blanket them in as well as create a pile over the next proposed bed to hopefully aid in ground breaking the area. 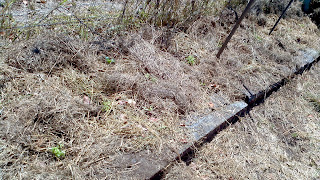 Today, I held the irresistible force who began jiggling for jobs at 7am – Dad in other words – off from the fun stuff we had planned for today for several hours while I did "mum on holiday" stuff - you know, washing, organising iPad strategies, keeping the peace.

Our next door neighbour had a few volunteers that V has been nursing for Dad until this weekend occurred, and we were set to do our two favourite things – plant trees and prune trees.  I finally allowed him to play after morning tea.

We first planted the tree that the neighbour’s neighbour (whose tree donated the seedling), the neighbour (who potted the volunteer), V and Dad think is a fig, but someone mentioned is probably a Indian Rubber Tree so now I am concerned… (and thanks to Google I understand my concerns – an Indian Rubber Plant is indeed a Fig Tree – but the Fig Tree of my father’s desire is, I think, the Moreton Bay Fig  - 9 Species of Fig Trees ) 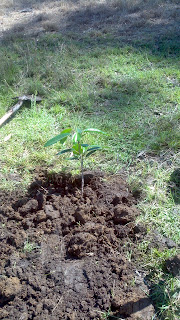 Then we got pruning.

I have mentioned in the past my affinity to the secateurs in our home environment – this is an entirely genetic trait, only my paternal donor not only has access to serious secateurs, he also has saws of the chain AND electric variety!

Again, far too quick off the blocks, but remembered to capture after shots of our bit of fun, getting some air into the mandarin and orange trees. 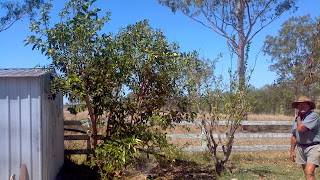 Every year the crop is hugely abundant with these trees – so abundant and yet nigh impossible to harvest fully due the dense foliage, the propensity of dead twigs poking you in the eye or inadvertent thorns attacking grasping hands. These excuses will no longer be valid – and while we may have reduced the potential load for next season, we have ensured the crop available will actually be available. 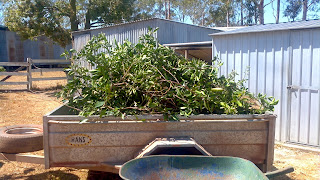 This got Dad’s pruning lust up, so short work was then made of a nuisance tree that he doesn’t really see the point of in the wrong spot. I did salvage 10 excellent branches for future stakes. 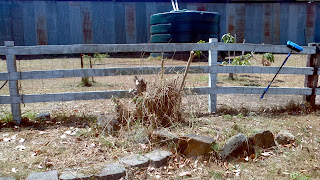 While Dad removed the rubbish and trailer, 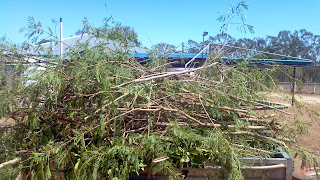 I planted the banana in a spot that should be slightly sheltered from frost and hopefully will be happy and offer golden riches for Mum’s daily breakfast ritual. 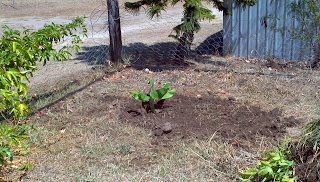 I then created some seedling trays as scientific experiments the next working bee.

As I have been busy gadding about, the garden has been V’s sole domain. 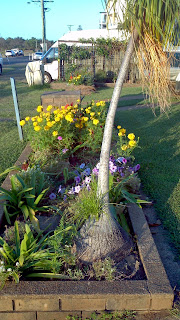 Luckily, the front yard has been a delight of self-seeders and sucking up the beauty of spring. 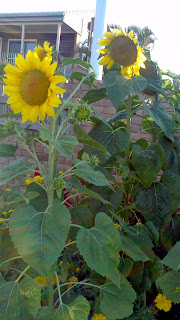 This is about 4th or 5th generation from the original Sunflowers in the banner of my blog.  One of the genetic "quirks" is apparently the occasional multi-headed flower. 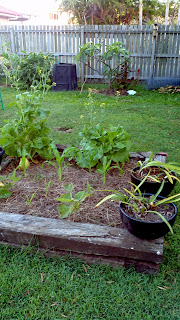 In the back beds, we have restocked where heartbreak was wreaked on the corn frontrage, while we have greatly admired the pak choi flowers.  There are also pumpkins growing in this plot. 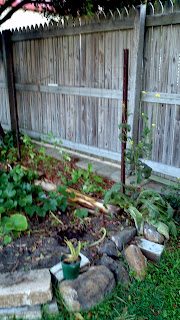 The corner plot - previously known as the tomato forest - is now home to some peas reaching for a trellis, self seeded borage, mustard, sweet potatoes, pumpkins, basil, marigolds and tomatoes - it will be thinned as the requirements of the season advise. 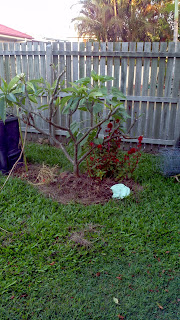 All of our frangipanni have now formed a good head of leaves - this latest one (also courtesy of the above-mentioned neighbour) is currently in great company, with a floral surround. 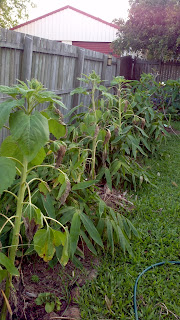 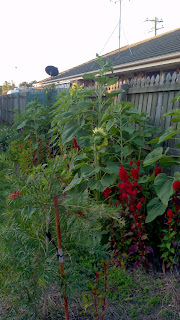 the side bed, as we also have some hopes of 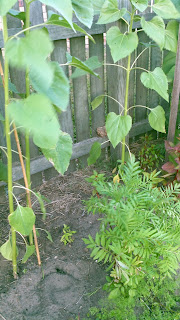 getting some heritage tomatoes of the not self-seeded camp going along here once the sunflowers are done.
This bed is already home to 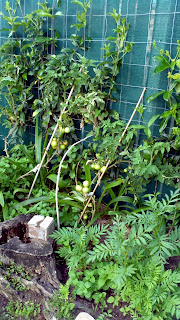 our current source of all things tomato!! 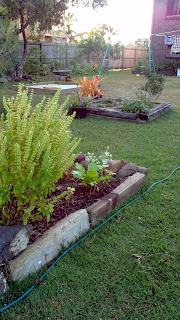 The basil, coriander and cornflowers are very welcoming to the bees, which is so heartening - one of my delights in the garden is the animal life that it encourages (well, most - I don't celebrate paper wasps, ants, toads or grasshoppers) 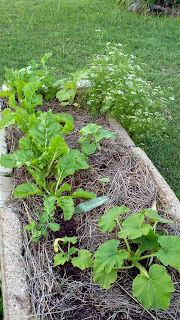 while the bed that, until recently, was our provider of peas and snowpeas, is now producing silverbeet and hopefully will offer zucchini and cucumbers as the season progresses. 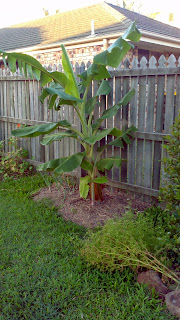 Our own banana tree has created a sucker.  We will keep one for next year's tree, but it is so hard to prune off such vigourous vibrant plants.  The sacrifices of gardening, a metaphor for life somehow... The herb patch at the side is not done justice by this shot - story of my blog, really - the sage has come back quite wonderfully after I removed the tangle of seedy coriander to its right, and has indeed flowered.  The oregano is also creeping towards world domination, while the thyme has gorgeous little flowers on it also.  To the left is some more coriander, severely hacked as it is the only way to treat it - I anticipate these bolting soon and hope the seedlings that V has going will ensure continuous supply - food in Summer (heck, any season) is the better for coriander.  On the far right of this shot is the start of the parsley mound - tabouli is on the menu often here - and out of shot is pineapple sage, garlic chives and lemongrass.
I am looking forward to my Garden tour tomorrow - Lizzie at Strayed from the Table is holding her usual monthly Garden Share Collective 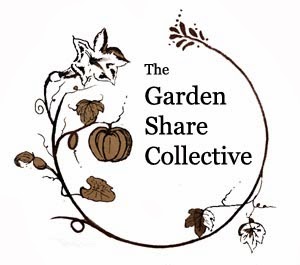 and she has graciously allowed me some time latitude in joining in this month.
Posted by jeanie

Wonderful post - how very industrious you have been!! Makes me ashamed of my own raggy plot. Adored seeing you and the girls last week. ♥♥♥

I am so envious of your gardening quests.

Thanks again for your sterling efforts this weekend. We loved seeing you all and I know someone else who was delighted with his garden now. xxxM

You are quite the handy one to have around a garden plot! I don't guess you make overseas house calls. ;)

Good heavens! You've been working so hard! :-) I was out in the garden for about 5 hours yesterday and my legs and backside are hollering at me today. You are a trooper. :-)

BB - I seem to recall some very lush vegetation under your netting. Zucchinis and tomatoes do abound and will soon overwhelm you, I am sure.

Trish - don't. I just spin it well and live in paradise, I swear. I do sometimes have little chats to God or whoever is listening about the need for enough water, energy and time for everyone to have a garden.

Mum - I love being able to spend the time with you guys, and it is what I am able to do - more than happy to offer that. Dad - have fun.

Krista - it is so satisfying (and painful) to get the post-gardening twinges.

I forgot - there was meant to be something regarding Seed Swaps for this month's Garden Share. I do have many basil, coriander and sunflower seeds, so if it is legal for me to send you some and if you want some let me know.

Oh what a fun post! Those words you invented fit perfectly. I was able to picture the action in my head just perfectly!

Me? Invent words? You jest - I checked, and someone invented them before I purloined for my own purposes!

Wow, there is so much space to plant and grow stuff on your dad's property. It sounds like a lot of work went into it - fingers crossed it all works out and he get the bounty he is yearning to have!

Melissa - my Dad updated me this evening - all of his seedlings are still alive and the seeds that I have planted are starting to sprout in the trays.