Another Wonderful Weekend in Paradise

ahhh, it feels GREAT to be back in the land of the living!

'Salina's game was great fun for about 1/2 an hour on Friday - luckily her attention span is a smidgeon shorter than mine, so I was able to deviate her a bit.

BTW - the springy things were apparently to do "boings" on. Always an important factor in a game board!

She then went on to create (with only a little bit of input from me - I was on a date with her SO I sort of had to lend a hand and not wander off to do all those jobs that always seem to waylay me) the following: 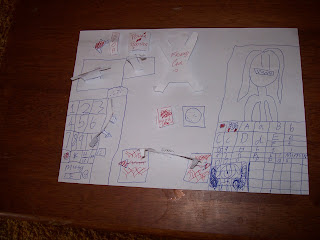 There are buttons for stop, go, turbo, food and drink. There is a microphone to put your orders in, a phone that can be hands free or pick up, a female computer to tell you everything (of course) and a keyboard that contains at least half of the alphabet. Oh, and a steering wheel.

We went to Mars to see the King and Queen - I then got waylaid by dinner stuff, so she came in to tell me she had shot them as (a) they had beautiful coats, and (b) they would kill and eat anything so she got in first. Where does her imagination come from?

We went to town yesterday for haircuts and to spend up big in groceries. As is a young child's wont, she wished for some money to buy herself a gift. As is a mother's wont, I was unwilling to shell for some more crap to clutter up my environment keen to use this as a lesson in economic policy and prioritising dreams and needs.

As she only had $3 to spend, we went in to Big W to find what goodies were available. $3 equates to bugger all in such shops although her eye did fall upon: 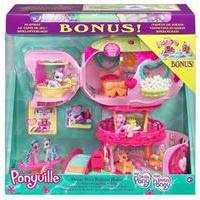 This is the child that I sheltered from such mass marketing appeals in her childhood - and it has scarred her. Nothing more heartbreaking than a 5 1/2 year old tearfully pleading with you to buy her a My Little Pony as she was "the ONLY girl who had none" - and she has done plenty to make up that shortfall in the subsequent 2 years!!

I brokered a deal with her to enter the world of lay-by - and we now have a willing slave to small tasks to gather enough small coins to pay her 3.50 per week to have it freed and in her care by her birthday - sort of win-win all around!!!

Using this newfound labour supply, my own refound health and energy and harnessing V's OCD tendencies, today we hit the garden with passion and enthusiasm.

This morning, I mowed the front, 'Salina trimmed shrubs and V muttered and attempted to make a whipper snipper work. It is the only time I have ever heard him express a desire to be a "car guy" when the (expletive deleted) whipper snipper did not comply with his demands. Mind you, he did a lot more mechanical dillying than I would have been capable of, so I will shut up now.

Then (laying down the (expletive deleted) whipper snipper), V and I absolutely annihilated the front garden that has been growing unidentified succulents unencumbered for the last 25 years - even found newspapers dating back to the 1990s (when houses were around $100,000 - sigh) and sunglasses in the mire - we have plans for that patch of dirt that do not include such species.

We hit a wall and 'Salina took her revenge by making us do exam papers she had prepared for us.

By 2 I was recharged enough to make patty cakes with her, restart the mower and do 1/2 the back yard and rake out 15 years of pandanus leaves and lawn clippings from the waste at the back of the garden.

While I was doing this, 'Salina and the boy next door just played and played - it was really good to see both just enjoy each other's company. As only children of single parents (which 'Salina was until recently), another child is always a new continent - it can be an exciting and/or scary prospect.

One game I overheard involved 'Salina being a shopkeeper - a favoured role for her - and boy-next-door was busy buying weapons from her. Another win-win, hey?

Although my butt has muscles aching that have not had that sensation for many a moon, I have a sense of achievement tonight that makes me punch the air (tenderly) and say "Yay us!!"

How was your weekend?
Posted by jeanie

I'm just exhausted reading what you did; ok, I am recovering from the lurgy, but I didn't have it as bad as you did.. I certainly hope that in a day or two I have as much energy as you have now!

Wow, 'Salina is so creative and imaginative!

I can relate with V in regards to whipper snipper hatred. I've got an electric one (which is ok) but the cartridge and cord it uses is quite painful because if it gets jammed it's a pain to get going again.

I had 5 childfree hours yesterday and did some reading and some weeding. It is good exercise for the bum and legs ey?

'Salina is an amazing kid. Her imagination is wonderful. She is 5 and a half, is she? When is her birthday? My son is 5 too. He just turned 5 last month.

I know what you mean about shielding your kids from the mass marketing crap. I have completely banned Bratz in all forms (not that she's old enough yet but one grandmother had been considering some of their clothes, Lil' Bratz). I hate the image they project to the kids, couldn't believe they produced a "spin the bottle" toy which they deemed suitable for kids as young as 6!
Having said that, I did have a My Little Pony as a kid myself (and loved it) and my little one has one too! So we're not completely immune but I try to filter.
Love the idea of your lay-by system!