(Edited to add this photo) 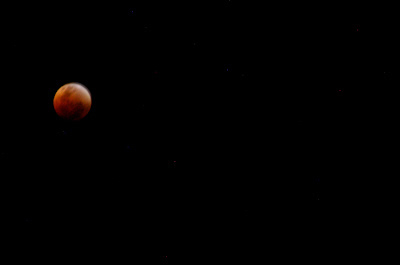 My sister, who lives on the property of my childhood in Central Queensland, managed to take this "snap" of the Red Moon last night - our view was obscured by clouds.

But one BTW - isn't she an awesome photographer? Helps to have a subject like that - but this is what she could do - her comment was "just hand-held and with my little zoom lense, so not award winning" - I still think it is quite stunning!!

I can see the rabbit - although I can't make out the stars she advised me of...

I forgot to tell the alarm clock I wanted to wake early this morning.

So instead he woke me at my usual time as he was about to leave for work (the joys of a job that finishes about 3 - but starts at 7) - eeek!

There is nothing worse than the sleepiness that comes from waking at your usual time and being on FULL PRESSURE ALERT from that moment.

So of course I turned around and did the same thing to 'Salina. She reacted much better than I!

I am still suffering the aftershocks.

Despite the horrific start, I actually had quite a good seminar this morning.

When I first went in, the room was like a morgue. I have realised that it is not me - it is just that a lot of the local businesses don't do the schmooze and I will have to learn whatever their networking skills are.

I engaged the "run comments through the filter before opening mouth" sequence and didn't embarrass myself. Well, most of the time, anyway.

I was able to hold a fairly coherent conversation with several of the folk holding the seminar, managed to interweave their business goals with my own and give out my own material to their positive comments and get a few new contacts for myself.

I was inspired - of course, since arriving home the lethargy has hit me big time so am relying on my list techniques to grind on through. Just drawing upon dashes of that business inspiration in small doses to perk it up here and there.

More there - its not coming through here, hey?

Leave you with something I thought was hilarious last night.

In my previous poetry life, I gathered several collections of taped performances - Democracy by Leonard Cohen (just realised it is his piece - how about that) is on one that 'Salina put into the player yesterday. (From an Anthology recorded for what looks to be an awesome documentary series put out in USA a few years ago - The United States of Poetry.

It is really well read and has a great backing track. Do click over and read it - an amazing piece.

Here is one guy's cool animation - this one is only short (30 odd seconds of it):

OMG - and here it is used as a trailer for March of the Penguins (this one is much longer - about 2 minutes):

Hey - and there are 8 used copies of the anthology at Amazon!!

Anyhow, a line that is repeated at the end of each verse is (an ominous) "Democracy is coming to the U.S.A."

"Well, thank goodness its not here"

Aaargh! There are very few things that I hate worse than being jerked directly from sleep into action!

I've never seen the moon like that. How cool! And I see the rabbit! :)

Your sister's photo is amazing... I can totally see the rabbit.

The picture - wow. I can see the rabbit, too!

Ha! Has Democracy arrived yet? Do you have her cell phone number? Can I give her a lift?

That photo is awesome! But your upside-down moon is freaking me out. (I know, I know-- it's MY moon that's upside-down.)

Thanks for visiting my blog :)

Wow! That photo looks like a marble. What a very cool result.

I often see things in the sky that I wish I could photograph, but I haven't figured out all the exposure stuff to allow the camera to accept the low light.

Yeah that photo really is awesome. Wow.
I will check out the poem. I like the rhythm of it.