I don't know how closely you watch the Queensland weather reports. We were trained to all be absolutely silent and reverential when the weather was on the news, and know the difference - in terms of anticipated wetness - between highs, lows, cyclones and troughs.

Well, currently the Barcoo is flowing THROUGH the old house and they have been camping in the shed for three days. What happens in floods is that every living thing is looking for a dry spot, so I don't imagine very much sleep going on!

As it took 6 years to get around to popping the question, and 2 years to prepare for the wedding (in April) I am only hoping that natural disasters will spur cousin's fiance into gear for contemplating a house (of wood or brick, rather than pegs and string) on higher ground!

Here is something on the floods in her area.

Something precluding me from quality computer hypnosis of late is a little indulgence I bought for 'Salina. My Pony Stables is holding her interest, although the primary purpose of becoming a "tycoon" has missed her (and I am quite glad for that!).

She has, however, discovered the secrets of getting the horse to jump and do cross-country, which she is ever eager to share with her visitors and cousins.

Unfortunately, this trumps Mummy's need to check out blogland, it seems.

Thanks to the tennis, I did not actually have a very enjoyable Saturday. On Friday night, we had made the "lets go to bed decision" at about 10.30 and had even gone so far as switch off extraneous lights.

Then we made our mistake. We decided to just see how a set ended (it was at tie-breaker stage) between Roddick and Kohlschreiber (known affectionately as Coleslaw in this house).

Luckily there was chocolate in the house to help us through that final set, because it was after 2 in the morning.

Well, after a lovely sleep in courtesy of the most beautiful child in the world, my head was only slightly cotton-wooly. We even went to a social function in the morning - but by our return, I can add "late night tennis matches" to my growing list of migraine triggers. Bah - I hadn't even indulged in anything stronger than the 1am chocolates!!

Hence - all really good blogs prepared in my mind were kyboshed by the fact that I could not move to save my head and stomach exploding. My neighbour (the lovely mother of Boy-Next-Door) had 'Salina join them all afternoon, and even provided me with some drugs to help the stomach bit - which did work, it calmed and only offered constant air expulsions. Noice.

I have just discovered that my crap Saturday has done me one good turn - and that is put me to bed early Saturday night, rather than stay up until 4.30 this morning watching Hewitt and Baghdatis.

An absolutely beautiful day in paradise today, so will be mowing and enjoying - here is the recipe for the awesome cake I made for V for last week: 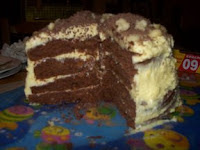 
Ice between layers, top and sides. We sprinkled grated chocolate and chopped macadamia nuts - it weighed about 3 kg, was too rich for 'Salina and drew the "that will put a gut on you" comment from my father, so a raging success! The creamed cottage cheese inclusion was due to misdirection in the dairy section while shopping, but turned out to be a very good substitute.

I received inspiration for it from here
Posted by jeanie

I just put on 3 kilos looking at that cake and reading the recipe!

And I've found someone who is suffering more from the Australian Open than I am. And sucked in more! I managed to get to bed in the first set of the A-Rodd/Coleslaw match!

Seriously delish Jeanie. I have no imagination when it comes to cooking. I feel like a gourmet chef when I manage to construct a decent green salad.

Hey - Ballyando (sp?) actual river in question!! Pleased to know said cousins are back in house to shower but still too stinky to reside there...
BushBabe xx

Have friends who bake from scratch when you only bake from boxes. It helps if friends live nearby.