I know - another recipe post, complete with crap photos - but tonight we had this for dinner and it was SOSOSOSOSOSO good, I had to share.

Earlier, I hatched upon a plot to cook the chicken I had thawed into - something.  I searched for inspiration in my trusty Google search bar.

Ingredients:
Method:
I first made the dough - and then went about my life for an hour or so.  As I had used fairly old yeast and fairly unscientific hot water, I figured it would need time.

I put the pizza stones in a cold oven and then switched it on to about 200-220 (hot)
I then chopped the onion and garlic, and got it all soft and translucent in some butter - mmmmm. 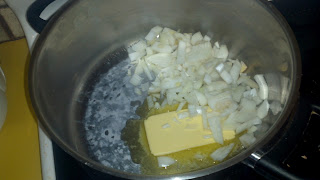 The old yeast that I used meant that my dough took a long, long time to "double"! 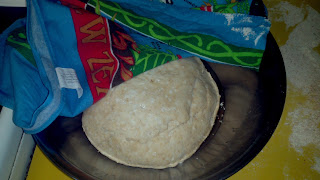 I chopped the tomatoes and thigh fillets and added them with the passata into my pot. 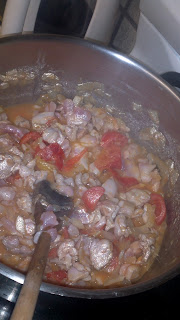 I then split it into two pots - one for the kids with some herbs and frozen veges, and one for us with all the deli goodness that I could find. 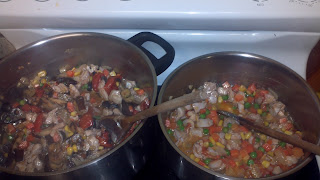 Stir in the cheese.
Punch down the dough.
I cut the dough into about a dozen littler bits, rolled them out (with the "assistance" of a 3 year old...) and made a variety of shapes and styles with my calzones. 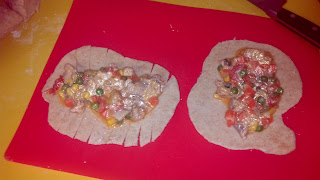 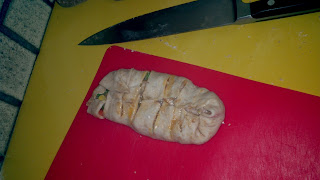 I cooked them in a hot oven on pizza stones until - well, until cooked. 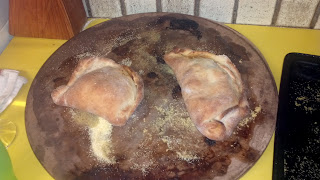 I had leftover filling, so made a quick pasta for lunches tomorrow. 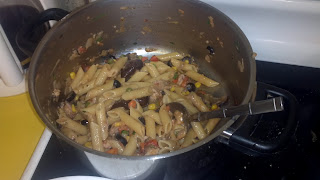 * My brother couldn't say "mix" when he was a tyke and it stuck.  It is still in use 40 years later!

** because I STILL haven't been shopping for the olive oil

So - what was for dinner at YOUR house?

And do you have any handy pizza stone hints for me?

I enjoy recipe posts (and the photos aren't crap in my book - as evidenced by those at my blog!) and this looks yummy!!

Seems like I had a pizza stone of sorts years ago, but I can't remember ever using it! So, I guess I'd have to just use a cookie sheet....and, of course, I'd tweak it a little here and there to suit my own taste. (isn't that what we always do?)

This sounds so delicious and savory. :-) Dinner last night was sushi after a loooooong day in town. Tonight it will be lemon garlic roast chicken with potatoes and carrots. Mmm. :-)

Kelly - absolutely - tweak away! This was such a hit with everyone that I have a feeling even leftovers will get the Calzone treatment for a few weeks!

Thanks for linking to my pizza dough recipe. We use it at least a couple times a month in my house. Your Calzones look amazing! Love the filling.

p.s. And I love when people say things like "complete with crap photos". :-) No one says that around here, and I always think, "well, why not?!"

It looks delish. (And no helpful hints over here -- I don't think I've ever used a stone!)

Jessica - thank YOU for the dough recipe (I found it via your calzone recipe) - I think it may get some high rotation here.

Pearl - I have a feeling that there is more than mere manners that stand between your "around here" and mine.

Oh YUM!!! This looks soooo tasty! Thanks for sharing the recipe! Off to bookmark! :)

I was wondering whether or not to get a pizza stone recently, when I asked around the answer was mostly not to bother - burnt hands etc Now I'm not so sure!

Grace - thank you for popping by to visit!

Brenda - They don't take much storage space and they do give lovely results BUT they can also be a pain in the nether regions and are not completely necessary to sustain life. We have two.