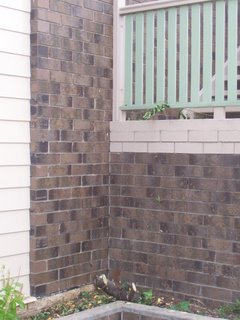 Once upon a time, there was a voluptuous bush who went by the name of Cassia.

It grew until it had covered the wall, the rails and even the stairway beyond. (Would have been better with a before shot, hey?)

But one sunny afternoon, after games of softball, watch the kitten, imaginary steamboat cruises, watch the birdies taunt the kitten and fold the clothes from the line, the resident happened to notice something.

It seemed that the jacaranda tree housing the birds had also grown during the Summer and was now threatening the sunlight opportunities for the lady next door.

With that, the resident reached for her hand Hortex Hand Pruning Saw (a little bit similar to this one) and attacked - and then she turned and saw Cassia - and Cassia's irritating hours were numbered... 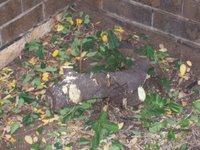 As you can see, this woman had inherited her pruning gene from her father, a fearless master of the chainsaw over the cowering roses of her childhood...

With concise and brazen strokes, she got rid of all that irritated her, and let sunlight and air into this part of the world.

Ah yes, and even though she knew the wisdom of moving the branches to the pile near the bins for the next time she got the man who has trailer ball, the friend who has trailer and the time, organisation and energy all in alignment to take this bounty to the local tip, she was gazumped... 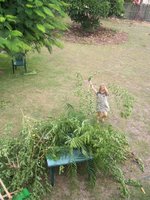 You see, this woman had birthed a very imaginative and industrious child, whose soul cried out for a cubby - and who was she to stand in the way of such plans. 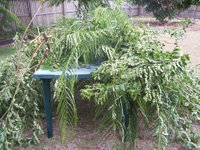 "Can I invite my friends over to have a party in here one day?" she asked. 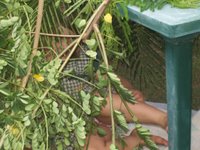 Alas, the honest horticulturalist within the woman could not make that promise, and broke the sad news that the cubby's days were limited, their lifespan severely curtailed by such a brutal cultivation. 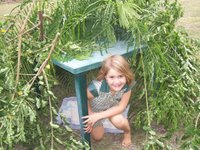 "because I already have a friend here to play with." 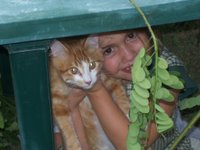 And so that is exactly what the adventurer and her friend did.
for the rest of the
happily ever
afternoon. 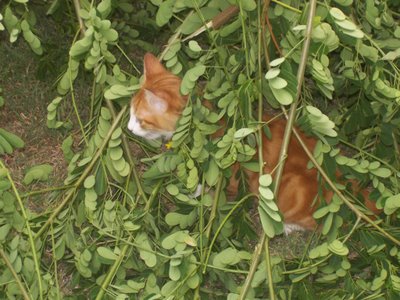 Although, I think the kitten was playing this game with the birds all afternoon, its just that the camouflage is more - um - becoming?

It was fun living it in the first place, and it was fun creating it!!!