Thanks to one of my new "finds" in blogland, I have inspiration for a post.

Being Me, Just for Them accused me of having "green thumbs".

I love me my garden, but so far my most exciting task has been ripping out the 20 odd years of weed grown and hardy (but ugly) plants to make room for my patches of sustenance and colour.

However, I have put together a montage to walk you through my garden... 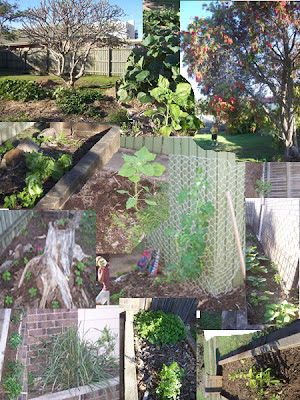 Okay, so, lets start at the front of the house and have a little walk around, shall we? The Parsley Patch - the secret to such a lush display of parsley lies with having a 7 year old daughter, extremely keen to get stuff growing and a parent not watching too closely to how instructions are being followed. Get the parent to have the patch nicely weeded, dug, manured and ready. Hand the seed packet to the child and WALK AWAY to another task. When you return, you will find that ALL of the seeds in the packet have been sown in a very small amount of dirt. Express astonishment but not admonishment, as you know that it is your fault for not watching with beady eyes all parts of the process. Thin as they emerge, and then prune like buggery every week enough to keep 2 hungry adults in continuous bowls of tabbouleh (but not child, because child doesn't like parsley), as well as enough to give all guests, hosts and neighbours a bunch whenever the mood strikes. The coriander component of this patch is courtesy of those half-baked plants they sell in the vege section and you think "heck, I could just stick the rest of this in the ground and see what happens" - and it ACTUALLY DID!!! The Front Garden was a lush jungle when I first moved here just over a year ago. Imagine all the lush creeping plants that require no assistance for 25 years, some lovely clover and grass covering this patch. Then you have to imagine waiting for rain to soften the ant bed hardness of the patch, straining muscles as you unearth these lovely, amazement as you discover a shrub beneath it all that looks like it was (gasp) planted, more sweat as you dig over the ant bed, add manure, lime, compost and lots of water. Finally plant seedlings (in this instance, marigolds, salvias and pansies) and pray. 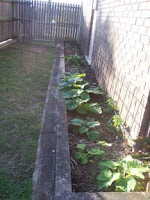 Zucchini Row - up until several weeks ago, this bed was possibly better known as "Cherry Tomato Row". Self-seeded, we had a monster vine that took possession of this bed and made itself quite comfortable. At times (generally the times just before we thought "hmm, time to prune") this one vine could grow upwards of 2 metres in each direction. It did lack one thing, though - viable tomatoes. Its strange, but they varied from "too green to pickle" to "too ripe for the birds" but we never found middle ground. So I got all huffy with it one day and just ripped the beggar out. Planted here now are zucchinis (obviously - although not as many as shown here, as I had another of those huffy moments this morning and culled 4 of the 5 male plants - good for only two things, and if there ain't a female around, the most important one isn't happening), peas, broccoli, bok choy (snails are loving this culinary option), beans, some beautiful flowering bulb thingy - and lots of self-seeded cherry tomatoes!! 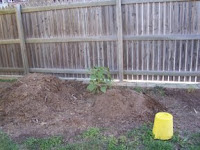 Compost Corner - the local council, in their wisdom, give all ratepayers a cubic metre of mulch a year... The only hitch is, you need to collect - so last year, we did. It was a romantic moment when V and I wheeled a trailer load of ground up green waste (and whatever other crap people throw into their green waste with no regard to the outcome). On this little patch of dirt, we have since had a constantly growing and shrinking mulch pile, fed with compost from our bin and green waste from our garden. If you look at my banner at the top, you will see my first green endeavour in the garden - my beautiful sunflowers. If you look at this photo (and several others in this series) you will see many beautiful self-seeded sunflowers - I love nature! 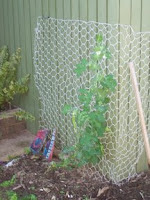 Snow Pea Extrordinaire - so called because she has certainly been hardy. Planted so long ago that I had seriously given up. The only reason she wasn't uprooted was because I am a sucker for a straggler, and so I watched her valiantly hang in there for months before she finally found the trellis, wend her way up - and then discovered that if she looked around the corner, she could see the sun!!! It was a joyous day, and she has almost doubled in size weekly since then, flowering and snow peaing all over the place. I have planted more since then, but I feel she will very likely only ever share her shade with them because she has now got the spotlight, baby!! 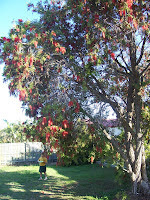 The Bottle Brush - I am afraid I can take absolutely no credit whatsoever for this! Our bottle brush is fantastic, though, so I am not about to leave it out of the tour. We have one at the front and one at the back, a haven for many birds and a constant challenge to our cat. I will take full credit, however, for the exotic frisbee player in the background! 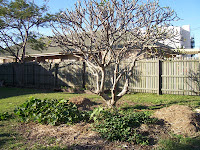 The Frangipanni Project. Previous to our moving here, a very good lawnmower man took care of the grounds for my parents. Unfortunately, he grew ill and sold his business to another lawnmower man - of which I am extremely hesitant to add the terms "very" or "good" to. As one who cuts the lawn, he was possibly passable. As to one who believed that effective weed control was to spray zero around all paths and beneath the frangipanni tree he did very well. It did destroy the weeds - and grass and topsoil, and left me a little project - especially underneath the frangipanni tree. I rebuilt the soil below and added a lot of green waste - including an old sweet potato and some pumpkin seeds, it seems. They are enjoying this opportunity to LIVE, as are the scattered self-seeded sunflowers. The mulch I have used here is shredded pandanus leaf - finally I have found a use for it BESIDES upsetting the neighbours each time the wind blows! 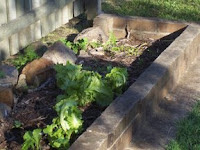 The Side Garden was absolutely covered in every weed imaginable, including some rather luscious asparagus grass. I hate asparagus grass. Now home to carrots, lettuce, eggplant, silverbeet, spinach and chillies. The lettuce are harvested by constant picking of the outer leaves, and I also grab the larger leaves of the growing silverbeet and spinach to make some salad - besides the parsley and the occasional carrot pulled to satisfy 'Salina and boy-next-door's curiosity (and hunger) our only edible harvest thus far - but extremely welcome! 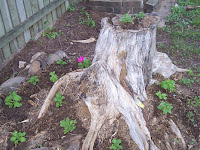 Petunia Stump Patch.
We (as in 'Salina and boy-next-door) have planted petunias around and in this old tree stump (previously hidden beneath vines). The card advertised deep purple and yellow - fushia has been the colour of choice thus far. No cane toads have been spotted in the area since. 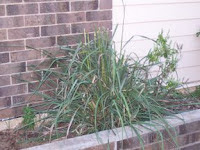 Herb Alley -my basil and lemongrass are again offering culinary options this year - and we have transplanted capsicum and chillies also to this bed (not pictured). This is where the banner sunflower lived last year and I am going to put some more in as a back drop, plus we are all praying that the oregano and chives in the annexe to this bed survive and pick up.

V has a theory that he owns his image and is very adamant that I not show the world my catch - therefore I am unwilling to replicate the very small photo of V in the montage. In lieu of that, I give you a shot of the bling. I suppose this way burglars can salivate while all those out there who aim to steal men away from happy homes will have to hunt elsewhere... ha ha 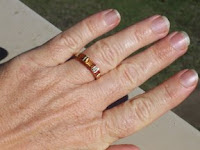 Meanwhile I will talk about something completely different, like the plans for corn patches in the back of the yard, watermelon beneath the pandanus trees and filling the craters in the lawn (due to shifting of large lava rocks in the fill) with cracker dust.

Thanks for stopping by for this tour. I am offering coffee, tea, cold drinks and museli bars on the balcony upstairs. 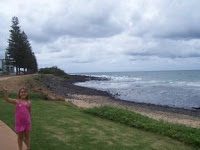 (BTW - this is not the real view!)
Posted by jeanie

Fantastic stuff Jeanie. I like the tour and I like what you've done with your garden. And get those kids to work I say. I bought my son a watering can recently and said he can use his bath water for watering (now I have inspiration for my own post).

I love all your gardening! I wish I had your luck with it. In a nutshell, I kill plants.

I especially enjoyed your bottlebrush tree. We had one at my folks house growing up, and it was always my favorite. I have never seen another in our state. So, thank you for the walk down memory lane!

Just reading about all the work you've put in made me feel exhausted! The result looks terrific.

Maybe I will take you up on that offer of coffee on your balcony one day. But by then I'd also expect to be offered a green salad or zucchini slice or maybe even a vegetable curry for lunch. lol

Your garden looks fantastic...would you like to come down and give mine a bit of a make-over?

I just looooove the bling...gorgeous!

I love seeing what's growing--have chives in my own garden but my own petunias aren't looking so good anymore, past their prime.

I didn't accuse you of hacing green fingers, I just noticed that you were keeping more things alive than I can! to me that is green fingers. My fingers are mottled brown and covered in weeds if you get my drift! Nothing grows in my garden, well nothing that I actually want to keep anyway, and I have a great catalogue of poisonous plants that just won't die, no matter how much weeding or weedkiller I use! I can't even let my kids out in the back yard for fear of them eating something that looks yummy!!

Jaycee: We use bath (and shower) water also on the days when we cannot water - but nothing beats rain.

SecondGoRound: Bottlebrushes are native here - as are some awesome coloured parrots who go wild for their nectar. I am amazed you had some over there.

Lin: Just as soon as I have got some female zucchinis to make baby zucchinis with, you are on for some slice!

Mad goat lady: When are you inviting me? I love ripping things out and rely on odds to keep things alive.

Scribbit: I don't mind you enjoying my petunias in the off season - if I can enjoy your petunias next go around.

Kate: I love your turn of phrase! I used to live in a house where the garden consisted of anything noxious or nasty that could grow with no encouragement. A pity that your kids can't enjoy it, though.