V's car is at the mechanic, so today we only have one set of (mechanised) wheels.

As he headed to work this morning, I told him to take the car, as I wouldn't be requiring it and it would save me .

I am all about stress minimisation.

So, 'Salina and I had a good morning - got the routine down pat, all set for sending her off to school and getting my teeth into some work - and were even done 20 minutes early. I made her do a few times tables (tough mother, hey?) and then allowed her the extra 8 minutes for television.

At 7.52am every weekday morning, my phone does the "Time for 'Salina to go to the bus stop" dance.

According to the labourer on the site where V is working, it did do its song and dance routine - but as it was in the car, we didn't hear it.

At 8am, 'Salina notices the time and we realise that not only has she missed the bus - but I can't drive her to school...

So we dusted off the bicycles and set off.

Half way to school, she remembers that she forgot to put her lunchbox in her bag.

There was less than a snowflake's chance in hell that I was going back. Luckily they know me at tuckshop, so we had a solution (that only cost me money, not more sweat).

By the time I got home an hour had been lost (I had to help out for a few minutes at tuckshop to justify to myself being up there) and I have been running behind ever since...

Still, must remember my new mantra... 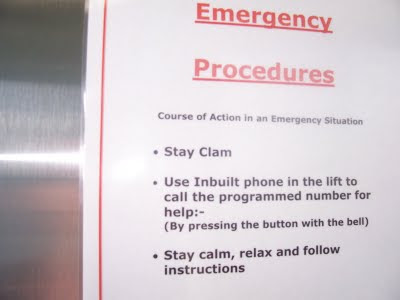 Comedy of errors indeed. At least you've done your exercise for the day!

I shall have to remember that line. "Stay clam."!!!

oh no's.
Stay calm ...indeed I am in awe of you getting on your bike at 6 months pregnant !

Goodness at you on the bike. You are a better woman than me, I would have declared it a stay home day!

Ha! Is that the one Debby used? Excellent advice for a pregnant woman, methinks!!

Trace - Darn - I was hoping that may count for a week at least!!

Trish - the baby wasn't so much in awe as in shock.

BB - unfortunately not - but have had fun playing on the computer (and getting paid for it) while sitting down for the rest of the time.

Staying clam works very well. I would have never thought about it...my focus was solely on staying calm. I've been staying clam, and been happy as a clam ever since, so you just clam up BB. :^D

What a Mom! Your kids will probably never appreciate all you do until they have their own. I'll bet the new one enjoyed the bike ride. Glad you were able to finally post the Stay Clam photo. In my case that means stop screaming.