A week and a day into the Paris Experiment

and we are surviving rather well - mostly. 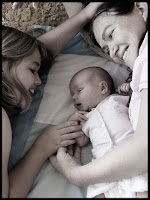 I have written a post - 3 or 4 versions of a post - but there seems there is much to do between gazing upon the beautiful young thing and admiring how well her big sister is handling the additional responsibility and love - the computer gets occasionally dusted and bills did get paid yesterday, lots and lots of loads of washing are done - but otherwise there is this vacuum where time disappears and the harsh light of reality doesn't directly affect, rather is refracted. (huge thanks to Bush Babe for this - and other - amazing photos) 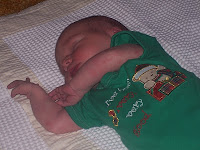 It has been wet here in Paradise since Christmas day, therefore most of our time seems to be confined to the house.

During the brief spell of sunshine on Saturday, we did have a half-hour in the back yard with 'Salina and Paris. My ex-MIL, Baka, once gave me some very sage advice, and that was to get the baby out into nature late afternoon, as it helped save you from Sundowners/Gin Hour and the baby slept better.

On Saturday night, we were lulled into a false sense of security as she only woke twice during the night and thought we had struck baby gold!!!

You can see where that leads, can't you... We forgot the Baka lesson (due to intermittent showers throughout Sunday) so Sunday night was pretty fraught, up and down many times - however, last night took the cake with constant attachment to the boob as she was working something through her system and needed the "dummy"...

I need Seattle mail to get here quickly, as I won a contest over at Bossy's where I am going to get some of Seattle's best, apparently. I will need that coffee when it gets here (although if the rain eases and we are up, we may walk across to my new best friend at the beach).

Thank you all for your input on the blogname for our little girl - I love Debby's logic, and so the nod goes to "Paris" for all of the great reasons mentioned...

...Blog name suggestion: Paris. You've been referring to the little beauty as a parasitic life form for so long. 'Parasite' is not a good blog name. 'Paris' is better. Copenhagen kind of long. As for myself, I will call her perfect.
11:29 PM, December 23, 2009

We saw the pediatrician today (those 5 words are actually hugely loaded, with a saga about weather, walking about ill-planned hospitals, administration and lack thereof, our luck in a healthy baby and communication abilities) about "clicky hips" so are double nappying for the next few weeks until another appointment where they will check if she is improved (and there is an addendum to the saga here about more of the same - sigh, it makes you wonder about hospital culture sometimes - something that grows on petri dishes, no doubt).

There are some rules I vaguely remember from last time around (besides Baka's, there is only plan 1 thing a day, a successful day means getting to the other end sane, set the bar low) but I want to know what the best TIP you received or created when dealing with a newborn...

About to go an act on another oft-given tip - nap while the baby naps!!
Posted by jeanie

*Sigh*
I have some predictions:
1. She is divine. Always will be.
2. Her hips will come good.
3. The hospital will continue to be a very annoying place to visit - try not to do it too often!

Now for advice:
1. Take lots of photos - she will change unbelievably in the next week!
2. Let her aunty BB hold her lots - it didn't hurt Salina too much!
3. Follow your instincts - apparently it's like riding a bike! You did a great job first time around.

Besides sleep the best advice was actually informaton about breastfeeding. Babies go through growth spurts and will need to nurse every hour or pretty all day and night for a day or two when going through spurts. Knowing this I just went with the flow and did not stress because I knew my babies would increase the supply when needed. The other thing~don't forget to eat and drink tons of water.

Look after yourself, avoid eating cabbage but keep it on hand in case of mastitis (it really does work wonders) express, express and express, accept all offers of babysitting, let random fairy godmothers bless her (but beware of those with obsessions of spinning wheels) and you know the rest ;)
She's gorgeous :)

Oooh. She's adorable. Baka's advice is right on, and napping whenever you get the chance is the best thing that you can do for yourself (and everyone else) right this minute. She does look like 'Paris'...the light shines from her little eyes.

Congrats on your new beauty Paris!! So happy for all of you and the good transition. Big kudos to Salina!

It's probably far to early into my own go at Motherhood for me to be giving out advice I think... But the best advice that has been given to me in the last four weeks has been:

2. Accept help when it's offered. This one has been hard for me, but letting other people do my laundry and dishes hasn't caused the world to end (yet!).

Paris is gorgeous and I can't wait to see more pictures.

This advice I received shortly after the birth of child #2--not quite 15 months after birth of child #1 (with a miscarriage in between). When those days of endless challenges of keeping them fed, cleaned, clothed, diapered, as well as attempting to prepare meals for the Parents, keep the laundry, etc with the two little precious babies wailing for attention--(So good that Salina is around to help!)

I was weary (Unlike Jeanie who always seems to be wired for keeping on top of things, and tic, tic, ticking them off her lists--You go, Jeanie!)

IF ever you have one of those "down times" when Daddy comes home and asks, "So, what have you been doing all day and where's supper..." you might consider what a friend told me when I told her I was exhausted but felt like I'd worked like a dog all day and could not point to one anything accomplished, she began: "Did you get out of bed today? (Tic) Did you get dressed? (Tic) Did you get your babies out of bed? (Tic) Did you bathe them, feed them, dress them?" And it saved me from despair! I made my (<)to do list(</) and Have Done list. It made all the difference.

But, you probably won't need such a switch in your routine!

Oh, I've just caught up with your blog. Congratulations. How exciting! And I love the name Paris, too.....seeing as how I'm heading there this year! In fact, I am knee deep in Paris info atm!

Now, go nap while you have a chance!

What a beautiful, perfect little one! Here is to an awe-filled, memory making new year. Congratulations!

Oh Paris is beautiful (as are you and 'Salina).

Best tip - They're only babies for such a short time, enjoy them, spoil them and waste hours watching them. In regard to everything else, only do the essentials, time cannot be rewound

The hips will be fine. My sister's baby had to go into a hip brace thing when she was born. Thirteen years later she's playing soccer for the state and is the biggest sporty girl around.

Congratulations, by the way. She looks beautiful.

I think you nailed the best tip yourself .. sleep when they do ..

to EVERYTHING !! best le

She is beautiful. I survived by taking the advice to nap whenever I could, I left so much of the washing up and laundry to my husband, I am unsure how he survived! I also used cluster feeding every half hour from about 5pm to bedtime to fill that little tummy and get a bigger first sleep for the night.

Is it wrong of me to want to nibble on her tiny feet?

Oh She is just gorgeous and I love the photo of the three of you together.

I hope that you get to stay far far away from the paed and the hospital.

When people offer up help take it.

A meal,
some time out,
doing the dishes, anything.
Don't try to do it all, it turns you crazy (trust me on that). LOL

Bossy agrees with the advice given and will do her best to get that coffee in the mail to you as soon as it gets to Bossy.

Very late with this comment, as we've been away and busy. She's so gorgeous, Jeanie! And I love reading your reports.

Best tip I ever got - I think when Ella was 6 weeks old and I was desperate for sleep - was a method to get her to sleep that the parents helpline told me about. This was when we were stuck in a cycle of overtired baby being impossible to get to sleep and overtired mother running out of ideas. They advised me to find something that would sooth her - in our case riding the cradle back and forth over the carpet - and to do that for 2 minutes, then let her cry for 2 minutes, rock for 2 minutes, cry for 2 minutes, and so on. It saved my life. I used this method until she was nearly 1 when she got overtired and after that first week, it got her to sleep within 5 minutes and I was a LOT calmer.

Good luck with finding a routine that works for all of you. :)

Thank you all for you advice - and once I have pulled this nap, I may just compile it!!!

Ok, best bit of advice I got, put a list on the fridge of stuff that needs doing (including nap time for you). Include note that says "you may hold baby once you have earnt it". Now seriously, if you have visitors with no sense of humour you might want to reconsider. but provided there is a sense of humour you can get away with it. And, its not asking for help!!!!!
K