I promise you, much shorter than the first!! Well, the marmalade making bit will be, anyhow.

For a start you are meant to soak the fruit from the previous post overnight. Due to my amazing time and motion management (and some persuasion from V not to embark on marmalade making post 'Salina's bedtime - something to do with wanting to spend quality time with me or something). Therefore I stretched the definition for overnight to over two of them.

For a second start, you are not meant to have a screw loose - in your glasses, that is, on the day you are to marmalade.

Therefore you are not meant to be scrounging around looking for rarely worn contact lenses so you can drive in to town to get your glasses fixed.

So rarely worn, in fact, that I had no idea what script is for what eye. The way I generally determine is trial and error.

Of course, being of some Scottish heritage, I had to use up a pack of the old script before I even contemplated the newer, stronger variety languishing in my dresser.

Therefore all trials and errors were slightly cockeyed, not reflecting my current glasses strength. So skewed, in fact, that when I dropped one of them it required both 'Salina and I on our knees using the "palms across the tiles" technique to try and find it.

It was on the mirror.

Anyhow, I did end up being technically not blind (but slightly startled looking from this side of the view) and did the shopping.

Forgot the glasses so will have to continue the contacts experiment for the next two days. Eeek!

Forgot to get new saline solution, so will either disprove a theory about expiry dates on bottles OR have to de-Scot myself and break out the new contacts sooner rather than later...

But you aren't here for such trivialities - you are here for grapefruit marmalade.

(I know - no cute grapefruity photos this time - something about rechargeable batteries that mean they require charging every so often, which would be NOW - which would be achieveable if I could find the darned camera)

Take out your cauldron largest stock pot and pour in the fruit and water mixture you have had in the downstairs fridge over(two)night(s). Bring to the boil and simmer until it is tender.

The time required for that would equate to about eating lunch, clearing up, playing a game in the living room with your child, thinking about napping and suddenly remembering the pot. And voila (insert mental photo here) - tender fruity stuff.

The next instruction is add cup for cup sugar. I had so much I made that jug for jug. And when I ran out of sugar (yeah, I thought 3kg would be enough but I thought wrong) I added every other variety of sugar I could find.

(Well, no, that was for dramatic effect. I added another 1/2 jug of raw sugar).

Bring back to the boil and simmer until it reaches setting stage.

Or, in my case, turn up the stove to where you think it will boil.

Then turn up the stove a little to where you think it will boil again.

Then turn up the stove a little more to where you think it will boil again.

Then make placatory gestures to your partner and child who really want your sunny presence when they attack the yard.

Continue this until you are as frustrated as bat$hit and contemplate life.

Remember how jam making was with Grandma. As good as she was at chopping fruit, she did have one annoying habit during the process.

See, Grandma was the most wonderful, gregarious, entertaining, scatty woman. Unfortunately in her latter years, the scattiness became more pronounced and got a definition placed on it. Before that, we could put it all down to her just being Grandma - after that, we had Al in mind.

So, about 15 years ago I spent a few months in the company of my Grandma at my parents and part of that time was just me and her. We created our own jam making label - "Jeanie'n'Gran's" - but really, it was therapy for both of us.

The downside of jam making with Grandma was that the moment anything approached boil on the stove, she would turn it off fearing it burning - this from a woman who stewed tea on her own for sixty years - and the key to making jam is getting that nice sweet boil to setting stage.

Anyhow, I have patience issues, so only time will tell if my 7 bottles of marmalade really passed the setting stage test or whether I just imagined a wrinkle on the surface of my test saucer.

So the recipe in entirety:
Grapefruit Marmalade

Boil until tender. Add cup for cup of sugar. Cook until gels. (According to my notes, about 3/4 hour for this quantity).

And this is a picture of 'Salina being something she saw on a David Attenborough documentary - because its nice to have a picture... 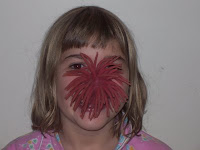 I'm still laughing at your stove dance. I was going to say something about turning knobs and boiling points but thought better of it. Almost.

Um. I think you may have gotten more than a recipe from Grandma...

You are too funny.

I'm a bit of a scatterbrain myself, and life constantly interrupts my thinking. In the winter when the wood stove is going, I had a tendency to leave the house without remembering to put wood in the stove. So I took a bright orange post-it note and put it on eye level at the door. It said 'FIRE'. Dylan, being a smartypants, saw the note, and then said, "No, mom...this is a door. The fire is in the basement", while patting me on my shoulder.

Alison - good thing you held back, because I really felt like a knob (and I don't mean the entendre version)

Deb - that reminds me of an interesting question I once heard - why are their braille signs on fire reels? You sure as heck don't want the blind guy trying to fight the fire!

lol...
To follow your off topic comment - I've been to more than one drive through ATM that has Braille keys. I mean - I am definitely pro inclusion - but really, if they are going to be aware enough to make equipment accessible they could at least be aware of the actual equipment!!
Although, people with vision impairment could be more capable of fighting a fire than you might think. Sight is just one of our senses - the sound and heat from a fire would be very strong cues for a person with heightened senses.
OK.. Soap box ending now!

Alison - the story I was given was from a guy who was deaf - he was explaining that there wasn't inclusion for disabilities such as his the way there were for those with vision impairments - I think he was spruiking for a bit of fire-fighting action himself.

hi friend ur blog seems to be good .. i ve started my blog just now so my friend i want u to visit my website frequently nd post some comments which ll be helpful to me pal and if u wish add as a friend of urs nd of sure I ll be visiting ur website daily ..... my website name s http://frendzz.com

I loved the knob dance... you big knob :-) I hope your marmalade sets, unfortunately not being a fan of grapefruit or marmalade myself, I won't be rushing out to give it a try!

By the way 'Salina's photo fits in so well with the post, but like you said, "it's nice to have a picture" lol

lol...you are too funny Jeanie.

I wonder if looking through squinting eyes caused the wrinkle in the test saucer?

Be sure to let me know how it sets as I have my eyes on this recipe too.
Mxxxx

Hey Joseph - a new friend from my appearance on a certain blogroll, no doubt. Okay, I take the snicker back - actually quite an informative site.

Mama Zen and Pencil Writer - anything to brighten others days, even if I have to write off mine!!

Megan - well, to use my father's vernacular, it is not "fast" meaning your toast doesn't have to run to catch it - but not so solid you have to carve - so all in all a successful recipe really!

Heh - thanks for the giggles, very amusing :)