Smiley Saturday - You've got to acc-entuate

Advance apologies for me not doing too much commenting in the blog-o-sphere - I am at Granite Glen and other far-flung realms until Tuesday. Now, I know in this technological age that far-flung doesn't mean off the radar, just means the radar operates t-h-a-t m-u-c-h s-l-o-w-e-r...

However, a quick post, and I tip my hat to Lighteningfor hosting: 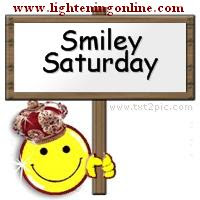 Here are a few smiles from our day:

Before heading over here this morning, 'Salina played softball. There was one unusual time-out called during the game - when a goanna wandered through the field of play.

Of course, if I was another person (like my sister) I would have had fantastic shots of the 30 eager children and 20 eager adults attempting to muster the goanna to the end of the mesh that protects the spectators from fly balls (and apparently goannas) but I am not, so you are again going to have to just imagine it, waddling along getting more and more agitated, checking every few feet to see if he could get through the mesh (he couldn't) and the adults trying to get the kids to stay behind the goanna (they didn't) so he wouldn't double back (he did). Eventually he got back to the batting plate and so our team opened the gate through to their dugout for him to go through to the bushland behind the folding-chair flotilla of spectators.

Still, two weeks ago we had time-out while a mob of kangaroos cruised the diamonds.

The three hour drive from Paradise to Granite Glen has its moments - of extreme static and cursing at the piece of crap radio that has only one speaker working (and yes, that would be the one farthest from the driver) and only one direction of its high-faluting controls guaranteed to work - which would be the volume control to lower the volume.

It has not be proven yet that the only way to increase the volume is to swear loudly while holding the button firmly in the up position after the 60millionth attempt - but nothing else works every time!

As a result, sometimes (when you have moved past the "static" or swearing zone) silence fills the car.

There are good times for silence - but I often demand that my passenger fill the void. If it is not organically filled with games suggestions or song requests I have been known to even pester said passenger with questions - curly questions about school and stuff that we-don't-always-like-to-talk-about.

I must say, however, that 'Salina outperformed herself on the ducking these questions - and she even got the volume to increase enough to be out of the firing line.

Some report was on about the financial crisis in Asia, and a very English journalist was giving it.

I was too busy holding back the splutter to correct her on (a) the nationality of the jounalist or (b) the non-pc behaviour in singling out others for differences.

"But we do have accents, honey" I told her.

"Oh yes," she agreed "when we are talking to Americans we have accents - but otherwise we are just normal."

Pop over and check out Lightening's story and the linky for others participating.
Posted by jeanie

Glad you silence was filled with normality.
Did you know you can speak sign language with an accent, too?
Enjoy your stay in f-a-r-f-l-u-n-g r-e-a-l-m-s.

Yes, that's right. We are perfectly normal......... until we open our mouths lol

Sounds like an interesting sports ground you have there. Sure it doesn't double as a wildlife park? lol

LOL - love the accents story. *shudder* at the goanna. Was it a big one? Would have freaked me out I think. :) Thanks for joining in Smiley Saturday this week. :)

Geez Louise... does she know she speaks Strine too??

She sounds wonderful. It is so nice to hear the innocence come out of them. Also a little embarrassing at times.

Wait! You have an accent?!!!! I have trouble understanding accents, but I've had no trouble at all understanding you. Except that one time you started talking about hoons...

Yeah. You have accents. We Americans love the English language and try very hard not to desecrate it. Bwahahahahahaha. Just watch our tv shows and listen to our lovely(idiom filled) English. Snort.

Did you know Queenslanders have a really strong accent (as do country Victorians, and those West of Sydney) to us more refined people over here in Western Australia with absolutely no accent??? In fact I've been accused previously of not being Australian because I have no accent!

LOL about the accents!!!
Although technically, she's right. You (or any people) sound perfectly "normal" in your own area, but have an accent anywhere else. Same for Americans, too, really. And we do have regional accents - Midwestern, Southern, New England - and within that, Boston, New York & New Jersey each have their own. And Tennessee seems to have a pretty distinct one, too.

HA! I love the no accent thing. And even though I do believe we shouldn't make fun of people I did laugh when she said Americans speak funny. (My husband's an American.)

I didn't know I had an accent until I taught English in Taiwan. Then I picked up an American accent over there. Go figure. (I'm Canadian.)

lol - the wonderful wisdom of children.
No wonder you keep her !

Alison - I would imagine so. Aren't there even completely different languages in countries that verbally speak the same lingo?

Bettina - it is right on the outskirts, flanked by some of the last natural habitat in the very farm-bound town - so understandable that its a handy paddock for the wild.

Lightening - big enough to shudder at, I assure you.

Debby - yep, kinda bursting the bubble, I know, but my hand is up to the possibility of an accent.

Crazed Mom - oh, we get to see plenty of your accents on our televisions - to the point where your desecrations are now littering playgrounds around Aus!

M+B - well, there is some strange stuff over on the other side of the land platter, I realise...

Just-Me-Jen - hey there, haven't seen you for ages! We have regional stuff here too (see M+B comments) although it is funny to see footage from the 60s where we talked more proper, yet somehow more strine!!

Womaninanwindow - V is an American also - although with over half his life in Aus on construction sites, its an interesting amalgamation.

Trish - wouldn't swap her for quids!!