This is one of those posts where you have to imagine the fantastic photos, because you probably need a few images to go with the sensational meal I will concoct with you this afternoon.


We have been child-free for the last 5 days (no, turn off your imaginations on that one - that is a by-the-by statement, not one to generate any sort of related picture) and resultantly, we have been eating some pretty fantastic stuff that 'Salina would delicately decline (you can put up a picture of that if you want).

We have had surprise salad (several times - so yummy it is a repeater that I will definitely post - maybe even with pictures - one day), tuna pasta bake with a parsley and lemon sauce (another successful creation), curry, burritoes with lots of onion and chilli and the most scrumptions silverbeet omelette ever!!! In fact, I think we might even sneak the last one past 'Salina's palate because it was really THAT GOOD!!!


Begin by harvesting the silverbeet that has been growing copiously in perfect conditions. No, I didn't take photos BEFORE the harvest - but here are half of the plants two days after the harvest. 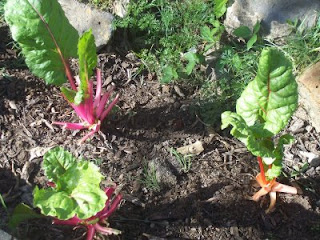 I request that you imagine just how much silverbeet that is. It is the biggest bowl that you have to overflowing, it is your largest saucepan three times filled with steaming silverbeet, it is about 3 cups of post steamed silverbeet all chopped up - it is lots and lots!!!

If I had been buying silverbeet, I would have had to buy about 4 bunches - so folks, get planting because once you are addicted to this it will save you a FORTUNE! Six plants, two weeks between harvests and you're home and hosed. Either that or frequent a shop that buys lots of silverbeet, sells little and loves you for taking it off their hands...


So without ado (or adieu as my grandmother would say) rinse in a large sink of water any dirt off the leaves, chop off any stems, and throw into said saucepan - you should have enough water on the leaves to steam them if you keep turning. As this silverbeet is "coloured", the water turns a lovely pink colour. Can you imagine that for me please?


Chop up all that silverbeet. Do you know I thought silverbeet was spinach for many years because it grows so well over here it is regarded as interchangeable on all recipes? I now know better, and regard it as interchangeable on all EXCEPT salads - raw silverbeet just doesn't do it as well. Of course, my childhood was not exactly packed with spinach in salads, so I didn't know that then...

Drain off more of that pink juice. Imagine that you now have a mound of rich green mush.


Separate 5 eggs. Do this individually into a cup and then put into your bowl, because as sure as eggs you will have one "oops" and you don't want that moment to ruin your bowl with 5 egg whites - we need the whites to be pure.

Mix your yolks with the rich green mush. Grind on some salt and pepper, a good grating of parmesan cheese and the leftover ricotta you have in the fridge from the spanikopita(silverbeet wrapped in filo pies) you made on the weekend. (See a theme here?)

Instead of the photo that should be here, I ask that you imagine the silver bowl reflecting the greens, yellows, whites and black flecks half-mixed, because the picture would be all arty like that.


Start some butter melting in a large frypan, and then get out your handy-dandy electric hand-beater.

Of course, you could use a whisk, and good luck to you. I used to be the sort of foodie hippie that did that sort of penance, but ever since my brother struck the jackpot in the Christmas gift selection one year, I have been very attached to my handy-dandy electric hand-beater. It is still the same one - my brother is going to fluke such present selection about once every 25 years, so he still has about 11 24 years to top or replace it.

Plug it in (very important part of the instruction) and whip those whites.

Imagine these whites in my white jug (I am a big believer in using the handy-dandy electric hand-beater with my white jug - not just for aesthetics but also because it stops stuff from plastering the walls - something to remember when you have children joining you in the handy-dandy electric hand-beater fun) going all hard-peaky.

Of course, if I was a certain food blogger (actually, any sort of food blogger at all) I would offer a handy-dandy electric hand-beater give away at this point, but until I get old enough for my brother to replace it OR I win some money OR the cheap-ass-brand that didn't even put its name on the cheap-ass economical handy-dandy electric hand-beater gives me a couple to give away (with postage) I can't do that sort of thing.

I am the sort of food blogger girl who asks you to imagine the photos so I don't think THAT is happening any time soon...


Fold the hard-peaked egg whites into the green-yolk mix very gently. Do this fairly much straight after you have beaten them, because if you stop to yarn about how you would do things differently if you won lotto or gave assessments on your family's gift giving stakes or whatever, then the whole "peak" aspect of the eggs is gonna get lost.

Someone once explained to me that eggs are like elastic - and when you beat them, they are "stretching" around the air. If you stretch them to max (hard peaks) and then have them all sit around, its going to be like those trackies that have been all stretched out one time too many and they no longer had the body stretching them out - if you get the imagery (or have checked out my laundry).

You are thanking me for that information, aren't you?


The picture here would have the silverbeet mix all nicely in your polished frypan, so that is what you should both imagine (if you are playing the game by my rules) and indeed do (if you are cooking). You would also notice that I had grated the leftover knob of parmesan over the top because I am fairly decadent when it comes to parmie.

Have it cook gently over medium heat for 5-10 minutes - until it sort of starts to bubble at the very edges because the mixture is so dense and the air cannot force its way through all that greeny goodness.

When it is at that stage, put it under the gorilla for another 5-10 minutes (medium heat again).

Once it is cooked, you can either gobble it up immediately OR take advantage of being child free and let it go as cold as it likes and heat it up when you finally get around to eating.


And here would be the picture of the empty plates with only one artfully draped crumb of egg-coated spinach fleck and two very, very happy people, sated with our scrumptious silverbeet omelette.

Isn't imagination wonderful - of course, I would edit out the bit where V then said "I am still starving" and cooked these cheese quesadillas - but forgive him, because he is a bricklayer who eats infrequently, but when he does clear the decks!!!

Oh, and he does do a mean cheese quesadilla!!! - as a bonus - here is the recipe (no pictures).

Take a tortilla. Slice some cheese. Wrap the cheese in the tortilla. Nuke.
Posted by jeanie

Sorry. Couldn't get past the part about "child-free for the last five days". The pictures, Jeanie...make them stop...

Yumm! We grow tonnes of the stuff and this sounds like a fab variation and if it looks as good as I IMAGINED then we will be very very happy!

I cooked silverbeet tonight in a big pot, tossed in some onion and ginger. Voila! A yummy sidedish to grilled salmon...

Sorry Debbie - I had you in mind when I made that disclaimer...

Megs_mum - oh, it is indeed! Oh, and hello to a fellow Queenslander!!! We'd be almost neighbours (if there wasn't a pesky thousand or so clicks between us).

Oh Kate - that sounds fantastic - another recipe to try.

What wonderful entertainment--and instruction! And I'm hungry. So, do tell? What's a "silver" beet? I know about beets--love them. Love eating beet greens (yes, even in salads) when they've been picked young--Grandma said the one you pull when thinning early on. So, I'm supposing "silver beets" might be some variety I don't know about? (We've only managed to grow beets one season--many years ago. It's so warm *read: hot* around here, that they're not easy to grow, unless early spring or late fall gardens? I don't know. I'm not a great farmer. *crooked smile*

Love the story and accompanying (is that a word?) photo's, esp. the imaginary ones!

Well, my mind's not exactly where Debby's was going, so those pictures aren't in MY imagination... Food, those photo images . . .

Now I understand. We call it swiss chard.

When I see the word beets I think the red things growing IN the dirt with the beet greens growing above.

Yum Jeanie, sounds delicious! Now I am just going to have to convince my husband that it is ok to eat vegetables and we will be having it for dinner for sure :)

Oooo that sounds goooood! You have me convinced that silverbeet could actually taste okay.

Ohhhh, can't imagine food without kids. It might just be real food. I mean, I love my kids and all (really, I do) but a NICE meal would be really, well, nice.

I was all ready to attack the silverbeet in the veggie garden, harass the chooks for some eggs and then make a big mess in the kitchen.
But I got distracted by the last recipe and now I have a wicked craving for cheese quesadillas.
Thanks V.

I have silverbeet galore taking over the vegie garden and 1 chook laying as fast as she can, so home grown scrumptious silverbeet omelette here I come! ;)

Like Melody, you may just have convinced me that silverbeet is edible!

Oh, I had to laugh at the cheese quesadilla recipe! My daughter used to want one with lunch every day and I made them the exact same way! :-)

It's rare to run across another 'Jeanie' isn't it? We are few and far between...

Being that I am so out of the loop I have never had or heard of silverbeet I'm just going to say that it sounds scrumptious.

Oh I have learned so much about this veg while trying to find you all a better definition: here is its wiki. It is related to both spinach AND beetroot - how about that!!! And yes, chard is on the mark - I had rainbow chard in the garden.

pw - my words tend to be as out of focus as my real photos!

Elizabeth - now I understand (see above!)

Tamsyn - there is no way, unfortunately, to hide the fact this has vegetable matter - but it is truly a "meaty" dish in terms of density and flavour.

Melody - believe me, it is all of that.

womaninawindow - I had dreams of a child who would eat adult food - didn't know I would have to wait until she was, though.

Alison - he says you are welcome.

Jayne - oh the bonus of a chook to provide the other component. Oh, and a parmesan bush.

M+B - this would convince the most hardened.

Jeanie - not only the same name but the same daughter trend! I think I will start collecting Jeanies - I have found 3 so far. (Ha ha - as I typed that, my next door neighbour who is a Jean popped by).

Kari - you must try it, truly nutricious and delicious.