Ahhh - we are back at home-sweet-home.

The trip to Brisbane was wonderful. Didn't catch up with anyone except the Outlaws and one other person the whole time we were down there - my mind was constantly spinning the "oh I should really call such and such" routine, but then the internal giggles from listening to 'Salina and her cousin BPC interacting would drown it out. 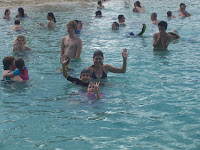 We chose discretion as the best part of valour, and did the South Bank thing on Tuesday instead.

Uncle Bo came with us, and the kids (including Auntie S and Uncle Bo) all splashed happily in the water (V and I had a romantic moment or two in chasing shade that coincided with a view of the splashers - I don't have Auntie S's body or a strong desire to share water with very strange strangers, and V has a thing about still water) until the impending waterburst from the sky chased them out. 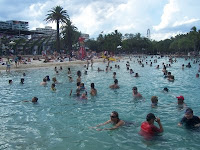 However, at Southbank we had to have a banana split, apparently. Of course, I didn't because of a strong aversion to bananas, and V doesn't because he has an aversion to eating heaps of crap while out, but the Outlaws and 'Salina saddled up to one of these monstrosities each. There was a verbal agreement that sharing would take place however when crunch time came the willingness to share was revoked and so each participant ate (or attempted to eat) a whole one each.

The skies opened while this was being attempted, and 'Salina's tummy issues (which would be linked to her mother's constant nagging - causal relationship, not resultant) combined with the deluge from our inadequate cover meant 'Salina was the only one not to finish her feast.

Before long the storm had passed and we walked back along the river to the cars. Along the banks many lizards were to be found, and there is no cheaper entertainment than watching a couple of kids count lizards AND get exercise while walking the path. Well, toss up between that and the eruptions of conflict between two only children with strong wills. That is fun too.

Tuesday also signalled the day that 'Salina's mother failed dismally in her tyrrany of controlling sugars and other crap being inhaled by her daughter, the end result of which was a very messy evening. She is the sort of girl who enjoys a sugar high - and gets a hangover from hell to complement it. I have tried to explain to her (and those who offer) that I am not being cruel in banning soft drink and sweets, but occasionally you have to illustrate the point, it seems. 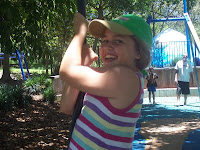 Colmslie Beach Reserve has a fantastic flying fox. Apparently (because others with me read the fine print) the fox is rated for 119kg, so the kid in V also came out.

There is also a really cool circle of swings, although once they have been heated up a bit they are not so pleasant to swing on (apparently lol). 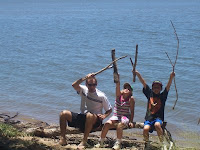 The warning signs advising "Snakes have been sighted in this area" heightened our thrills, as the children (without knees over the age of 20) raced through the obstacle course - forwards and backwards - several times.

We then went down to "Colmslie Beach" proper. ha ha ha ha ha ha ha. It was high tide, therefore the only "Beach" that could be seen was the tidal line of driftwood and rubbish - however the view was great, with the Gateway bridge in one direction, the circus in another and a bird on a pylon for artistic effect. 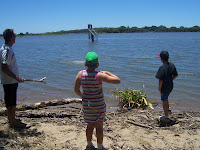 Of course, you don't have shots of these spectacles because I am not a very good photographer, so you have to rely on my words.

The fireworks in the evening were at 8.30, and we were prepared. I had rung the Council and Arial had assured me of the time and location. We had discussed our strategy and worked our route to the vantage point of choice.

Even the best laid plans have a few kinks.

It seems that asking "shall we take the picnic rugs?" should not be seen as answered in the negative if noone offers an affirmative, a pair of legs to go and retrieve said item OR an arm to carry it under. Taking stoney silence as a negative leads to the constant whine of "I knew we should have brought the picnic rugs" from the under 10s.

It seems I should have questioned Arial a little more closely about the lawnmowing services the council offers parks that have advantageous views of the fireworks.

It seems that someone should have factored in the geographic skews of hills and trees, and indeed the growth rate of such trees since last time that park was used for such a purpose by the participants.

However, after Auntie S took the children to a spot to the right and higher for better "awwws" and "ahhs", there was another factor.

I should have asked Arial about bull ants.

We overrode the non-voting members on a "stay up all night" request (we are not STUPID and appreciate child-free time any night of the year) and played cards, drank wine and coffee until the cheers around us alerted us to the calendar change and then we slept.

Its been a pretty good 2009 so far, and I figure that I am not upsetting the cart with any "resolutions".

I do, however, have goals.

Sounds like a terrific time and quite interesting in so many different ways. Where are the lizard pictures? You know I like little lizards! I'm glad you had a very nice time! Welcome home and Happy 2009!

Sounds like a fun New Year, darl! Dash and Violet will be jealous of the fireworks experience... and are asking for Salina's presence back here constantly!!

I am with V on the still water (esp South Bank) opinion. And with you on the banana front.

'Stay Up All Nights'! They were a big treat and that's exactly what we called them. What I loved about them was that the kids would make all these big plans, and then generally have such a big day planning, that they were sound asleep on the couch by 11. I'd forgotten until I read your words.

my oh my extra points for effort !! well done dear one - a huge undertaking ..

we are a no sugar family too .... so what does nanna give the lads as part of the xmas gift - eight small chocolate santas .... I gave each boy one santa each on the day and I will ditch the rest. I would do the noble thing and eat them myself but they are crap quality.

Call me harsh, mean, nasty whatever - we like our kids sugar free - why would we give them the sugar rush just to have the sugar lows and the rashes and the attitude the rest to deal with - NO thanks .... most people don't get it at all ... blah

Happy New Year! Sounds like your off to a great start!

Wow! What a day! Here it is cold and wintery, so seeing pics of people in the sun and water and reading about bugs and picnicking is like reading about life on another planet entirely.

Sounds (& looks) like you had a great time in BrisVegas...

Happy New Year to you too Jeanie. I hope you achieve all you want this year...

Happy New Year for Thursday :-)
Happy Sunday for today!
Good luck with your goals, and wishing you 365 fantastic new days in 09.

Just once, (okay, more than once), I'd love to spend Christmas in the Southern Hemisphere. Well, the warm part of the southern hemisphere anyway. Antarctica doesn't count.

Sorry we missed you, it was so hot and stormy though on the Tuesday, wasn't it! Happy New Year and have a wonderful 2009x

It sounds like you all had a good time, however my heart stopped at this section:

Quote: "The warning signs advising "Snakes have been sighted in this area" heightened our thrills, as the children (without knees over the age of 20) raced through the obstacle course - forwards and backwards - several times."

Happy new year to you also, Megz_Mum. I am not a fan of crushing crowds with OR without children - I am very glad also.

Crazed Mom - sorry I didn't grab you a lizard shot. Will try better next time :)

Bush Babe - Dash and Violet will not be jealous of the ant bite 'Salina received.

And also to you, Jayne.

Debby - I too remember when it was an exciting threshhold to cross.

Le - well, you would TRULY understand the whole sugar thing. Like drugs or alcohol and SO UNFAIR (said in the voice of a child).

Happy New Year to you too, Mama Zen.

Mary - do you know there are folk out here who dream of a little snow?

Melody - thank you. I hope the secret is to envisage, because 2009 is the year of the envisage!

Happy new day, Alison. Every day thus far has had its features of beauty.

Ree - standing invitation. I was going to say house swap but - nah, I don't know how to dig snow except from afar and with someone else wielding the shovel!

Stevyn - if it makes you feel better, 3 of the 4 days thus far have been gale force and raining? Of course, the fifth looks pretty perfect thus far...

Rhubarb - we are sorry to have not made more of an effort to say g'day to you too. Darned time and motion!

Kari - the trick with snakes (well, our varieties) is to make sure they hear you before you see them - then 9 times out of 10 you won't see them.

Being Brisbane born and bred, I know Southbank well. So long as you love crowds, you will always feel at home there, lol.