Has raised its head again - quite providentially in time for us here in Paradise. 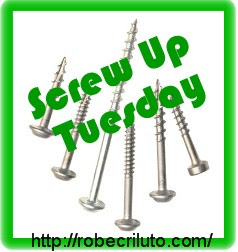 Mistress B at Dances to the Beet of Her Own Drum hosts a weekly round up of such - and until last night, I would have scoffed at my need to include myself in it.

And then, last night happened.

Last night really began yesterday morning, with the usual banter countdown to bus time that takes place between mother and daughter some mornings.

As I was screeching advising 'Salina of the finer points of a tidy room, a lead from a pacer made its point - right in my foot.

'Salina then made the inadvised move of asking me to fill out a form before making sure I wasn't dying of lead poisoning.

Yesterday afternoon, 'Salina finished her chores and asked Girl-Down-the-Road for a play. Play they did, but she was not a stepfather-friendly version at the conclusion of the playdate. After overlooking a myriad of implements they had strewn around the backyard and failing to advise on the breakage of backyard furnishings, there was somewhat of a strained atmosphere in Chez Paradise during the evening.

An addendum to this situation was discovered today - apparently she and GDR discovered the cache of bonbonierie hidden in the fridge downstairs - and helped themselves.

Last night (after the long evening), I was putting away the washing up making coffee when the front of the cutlery drawer came out - but the rest of the drawer didn't. It now matches the cupboard door that doesn't exist - I am touching wood (but walking on chipboard flakes) that the timeline on dream kitchen renovations isn't farther afield than the timeline on a completely matching rustic kitchen!

Today, the fan in our bedroom died, and so joins the microwave and the electric keyboard on implement demises over the last week - we are hoping to heck that the rule of three applies.

So, how is life treating you?
Posted by jeanie

The graphite in the pencil won't kill you, but I'm sure it hurt like heck.

You've had a bit of a week of it by the sounds of all that!

Good luck for your interview tomorrow. Enjoy being the tuck-shop bitch, 'Salina's softball break-up, and the divine weather.

I was going to say 'when it rains it pours, doesn't it?' But that sort of clashes with the closing comment about the divine weather.

Oh dear.. get those 'three things' out of the way before I get there!!! It is late, I am tired and I should rouse on you for a little indiscretion here. Instead I shall inflict my two terrors on your household in leiu!
Au Revoir
BB

Hope today is better and your interview goes well.

We've been having a run of bad luck on the stuff too, lately, but then it's just stuff. Otherwise, holding our own. Good luck with the job!

Yikes, the rule of three should see that you're in better luck shortly!

Crossing my fingers that the rule of 3 applies!

Ouch, that would have hurt.

And here's wishing you a new kitchen in the not too distant future.