My sister has a wonderful tribute to her horse Eve. Do go over - but take a tissue, because it made me cry, and while I am not a barometer to trust on all things teary (I cry at ads, folks) you would have to be stonelike not to be twanged by the amazingly wonderful story of a love between a girl and her horse.

My horse wasn't one I pined for and woke at daylight each morning to see if she was born. She has no lore apart from the fact that she was a pony and lived up to her name. 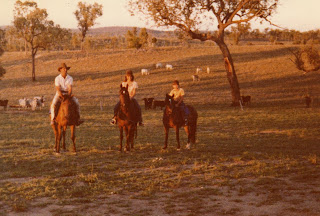 Alluded to in BB's post was a breaking-in school. She makes it sound like a rite of passage for the love affair that was between her and Eve - and obviously different people get different versions of events.

I am two years younger than BB (and 1 month and 5 days, she just wears it better) and have always been. I cannot recall whether it was a whinge from me ("she always gets to do great stuff") or a wonderful idea of my father's ("can we get a bulk deal?"), but I also got to be a student at that school.

And, as a metaphor for equine/human love lives, her experience of the long shot with misty hills and melodious backdrops is one for the romantics. My experience? Well, did you read my poem in the last post? Yep, cue rock music, quick-cut montage and the agony and ecstasy of what many confuse with passion.

Dusty Gal was actually never my horse - she belonged to my uncle as my uncle owned her mother. Her mother was called Dusty because that is how she left her riders - and the apple did not fall far from the tree.

She was given to me as my experiment because she was a squirt of a thing - like me - and as she would eventually have to be broken, I was the sucker small enough to attempt it.

BB has a great shot of her coming adrift from Eve at this event due to the lack of full girth tightening. And by the way - despite her fears to the contrary, ALL of those teenage boys were definitely checking out the cute chick graciously arcing through the atmosphere.

(I know this because I was the younger sister who was the target of these teenage gods approaches to find out more about my big sister.)

When people viewed my interaction with Dusty Gal, they had emotional responses also. Think - the youngest, cutest (what good is memory if you cannot enhance?) shortest person at the breaking-in school on the shortest horse most of the time. It was definitely a hoot worth taking your popcorn along to.

The good news is, Dusty Gal never bucked. She had such an arsenal at her disposal in terms of removing riders from her back that she would not deign to such foolishness.

She would bolt, prop, duck sideways, backwards and overboard.

Other students of the school stood in wonderchortled in paroxysms of laughter at her lithe ability to not be beneath her rider, whether it be in the paddock where we took long rides (and I took long walks), in the big yard where we cantered figure eights (and I found the fence, the sand and my hat all too often) or even in the small yard where we were to "take the buck out" (ha ha ha - who needs to do that?).

Oh, I did love Dusty Gal - I admired her grit (as I spat it from my teeth), her wit (untangling myself from wire rope) and her determination (as she repeated such offences with any grown man who tried to show me how I should be taking control).

The best thing about Dusty Gal was that she was sneaky - an no-one was more relieved than I when she snuck into close enough proximity to the stallions paddock that she became a teenage pregnancy statistic and I was off the hook.

And I realise that I also got to find many metaphors for Dusty Gal in my earlier love life.

Too fast, too unreliable and dangerous - and I somehow believed I could break them.

But then - I would always pick myself up, shake off the dust, swear a few times, scream a few more - and move on.

(I would not count V as a Dusty Gal allusion - you do eventually get over such stupidity lessons and move on. He is far more a Statesman allegory. Now, Statesman I truly loved because that big bay gave me confidence again.)
Posted by jeanie

Jeanie, you are an entertainer. Thanks for another horse story. You're right: No tissues needed--unless to stifle the chortle or two that escaped me. :-}

Heh. The other side of horses and riding. :)

Oh you are a cack!!! And you have a very hazy memory at times... but I'll let is slide this time. There was no 'graceful' in my sudden fence-assisted 'dismount' I can assure you. I think about 20 people got a copy of that dreadful photo... *shudder*.

Methinks Jeanie forgets how incredible it was that she hung in there with the notorious Dustygal as long as she did - and how funny it was when grown men failed to handle her as well as you! Ha! Definitely a different relationship, you and DG. I cannot remember how much you rode Eve?? She was a darling (except when being attacked by red hornets - ye-ha!!).

Thanks for makin' me laugh!
BB

Oh I'm glad I read BB's post first, cause I needed something cheerful and fun!

Tried to post a comment this morning, but could not. Jeanie, you are toooo funny. Who knew that horses would impart such wisdom? I feel as if I missed out, although I did take a hairy ride on a galiceno who did not like me at all and took me through a clothes line before depositing me in the barn yard and heading inside for a break from the dull and dreary routine of his life. Being a dolt, I learned nothing from the experience except that I like dogs better.

I enjoyed reading that. Love the photo.

ha! Great story, thanks!!! This was a good way to get me over my tears over Eve. You two girls had an amazing childhood and i can just see Dusty Gal dodging around dumping grown men. Love it!!

Is big bay a different way of saying big boy?

Oh. And a cack...is that a good thing? Like short for cackle?

PW - I am glad I got you to chortle - we all need a bit of chort in our lives.

Mary - that would be the under side?

BB - lol I had forgotten the day of the hornets - 3 of us fell off at different points of that day, if I recall.

Thank you webradio - but why do you have a popup on your blog?

Debby - you are too funny - you forget, I could find a life lesson in watering the garden. I think yours may be a laundry link.

Thanks Elizabeth - after all your great photos, that is a compliment.

Kate - my pleasure. We also had another pony called Sardine who was even better at that!

Crazed Mom - Bay is a horse colour, but yeah, I suppose.

Deb - a cack can come from many linguistic roots - I suppose the clean one is a cackle, but there is also the "cack your pants" derivative - she didn't mean that one!

I had a horse when I was 13, in Brisbane. Then I lived on a station near St George for a few months and got to ride every day. :)