Yay - the batteries and the camera have come to the party that is my moaner's Mother's Day, so I will walk you through the feature of my life at the moment. 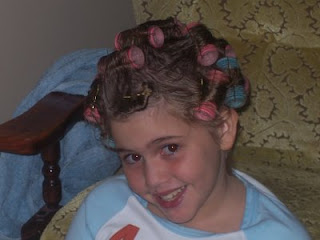 Here is the reason I get to wear the Martyr's Crown. This was last week. She was well last week. Well enough to beg me to put curlers in her hair. She has a combination of genetics that lends itself to putting curlers in her hair for absolutely no gain - both she and I occasionally hope that something will take, and we have fun trying. I try not to blame this exercise on her being at death's door current malaise. 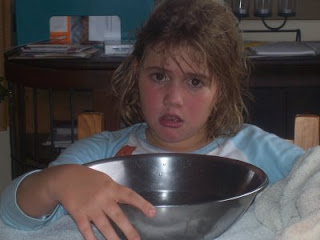 Here she is after a bout of the most effective treatment available to her. As mother's (well in my family) have in generations past, I put a bit of eucalyptus in some boiling water, stick my kids head over it and a towel over her head. It does actually cut the coughing - and even when it doesn't, coughing is far more pleasant muffled with several layers of towel and scented with the odour of gums. Sickroom smell sure does permeate the house otherwise! 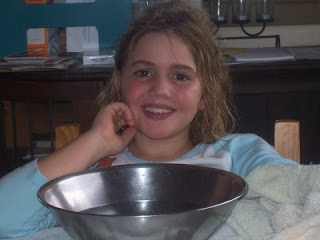 See, she can put on a happy face - that is what makes this motherhood gig so worthwhile, that she makes an effort. 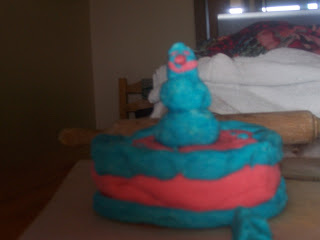 I make an effort too! See - some SUPER mothers CAN whip up a batch of playdough when their children beg - and look pathetic - for long enough and hard enough. 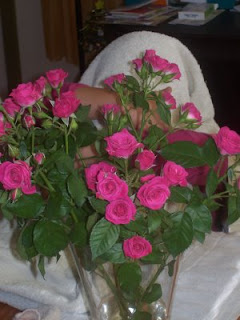 Because I get the joy of jaunting off to work for several hours a day away from the constant hacking, I felt sorry for her and bought her some flowers. I felt sorry for V too, but he won't be bought by flowers - I made him muesli bars. She loves her flowers. 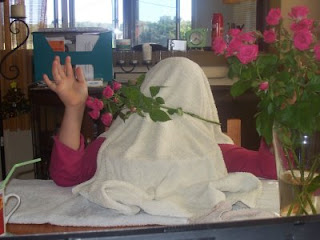 She actually said to me last night (in her weakened voice with just a trill of pathetic sickly child) "sorry I couldn't get you flowers for your Mother's Day, Mum. Sorry I have been so much trouble." awwwww - I responded it was her job to be annoying and my job to look after her with as little complaining as possible. I didn't mention it is an insurance policy for old age. She is smart. She will work it out. 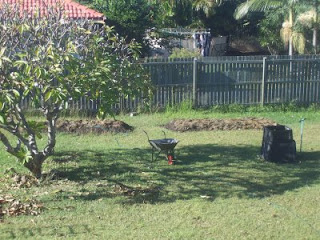 This is the view from my back window. I call the one on the left "my Birthday present" and the one of the right "my Mother's Day present".

Hey - where do you THINK she gets her ability to generate total pathos from?

By the way - I would actually LOVE it if we had a beautiful Mother's Day and I wasn't moaning TOO! Its just that I do it so well, and it is the only string to my bow after being woken at 5.20am - no sleep-in and breakfast-in-bed option to tick apparently!

The whole world is a better place that I didn't chose nursing as a profession.

I would love to send a shout out to all the Mother's who HAVE done this, either newly or forever - some do it without complaint. If that one is yours, give her an extra special hug - mine will be getting her extra special hug down the phone line now.
Posted by jeanie

Labels: violins wailing in the background

Awwwww... Poor 'Salina!!! I hope she is feeling better soon.

On a brighter note - We don't do hallmark days, but if YOU were writing the cards.... I may just change my mind!!!!!!

I could never be a nurse. I lack sympathy (at times).

Happy Mother's Day to you, Jeanie in Paradise...

Ah, poor thing...her, not you. I know, I know. And that shot of her with the towel and flower in her mouth, hilarious! You have a wonderful mother's day, k. Enjoy!

The child has your sense of humor. (That's a good thing by the way!)

I could never be a nurse either. I'm TOOO sympathetic. If someone throws up, I throw up with them as a show of support. Best that I stick with mosquitoes.

Happy Mother's Day!
I knew it!
You got worms....and a vegie garden built for you lol :P

Oh the poor thing! I hope that she is feeling much better soon. Miss Nine is home sick today too but I think that it was more a ploy to miss out on the school cross country being run today! She did sleep though so maybe there is some truth in her ailment!

Those flowers are a bit gorgy aren't they!!! Poor 'Salina, hope she is all better soon and no more bugs!

Hope yesterday was not too bad. Seems to be a running theme, that Mother's Day was somehow not wonderful.