Well, a lot has happened in Paradise (and to the inParadise family) since last I blogged...

Lets see - feasting, family, funny heads, frantic computing, finding sandals, feeling for friends, and computer v!ruses (or should that be v!rusii?) - so it wasn't completely f-ed! I amuse myself.

Friday we went to the local Mexican establishment to sample some delights and take my San Diego boy back to his roots (so to speak).

They have an "all you can eat" deal available certain nights so we thought, what with the appetite of V, that might be the way to go.

It was good and it was not so good.
Yes, we were very full. But no, we were not satiated. We got a take-away menu as the food was good - but the prices? We have realised why we eat out or get take-away so rarely!!

On the weekend we went to the family property, as I am doing a bit of computer work for them to (a) take the load off them, (b) have a great excuse to visit more often, and (c) they will pay me!

On the way there, we stopped at our usual playground (where there is a merry-go-round with real live plastic horses to ride). As we left, 'Salina was questioned on the status of her sandals. She replied in the car, and I made that fatal mother mistake of NOT CHECKING. Needless to say, she only had a pair of riding boots to wear all weekend. 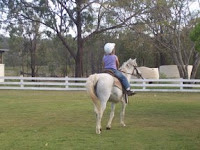 It was great seeing everybody - and we got to see the whole shebang - 5 children, 4 parents and 2 grandparents. My family are a wonderful bunch of people - and like a lot of large groups with familial ties, we have our moments and idiosynchrasies - I am sure that people require a lot of training and forebearance coming in from the outside - and other families who have their own unique moments and idiosynchrasies.

Poor old V had been a little under the weather all week, and got family-stroke so was laid out for the whole evening session. He had just finished a full week of physical labour and needed to rest. My family - well, we haven't been brought up in a rest-advocated environment. We are opinionated, vocal and a lot of work - even in leisure-time - gets attempted.

Well, I was out there to work anyway, so I did. Pagi (grandpa) delivered a bull with the girls - 'Salina, FlowerGirl, RockGirl and Supergal (Spideyboy was girled out and Bruiser went home for a much-needed nap) and then Pagi to saddled the horse for her usual ride. Both mothers and I did officey stuff, Nana packed up more "stuff" (she moved - ahem - from there 10 months ago) and BIL sanded back a floor in the new kitchen - because its the weekend, and that is what you do on the weekend. Its not real work, its weekend work! 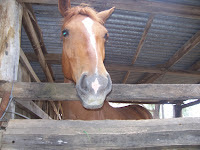 By next day, V was up to light duties (keeping Supergal, Spideyboy and 'Salina out from the house)- an easy prospect in the end as there are many interesting things for youngens out there. Dog pen, bulls, horses, shed, sand piles - you know, the perfect playground. I was back on the 'puter, BIL sanded back more floor in the new kitchen and SisterJane uploaded and edited the photos that she had taken for the local kindergarten - its Sunday, and that is what you do on the weekend. Its not real work, its weekend work! 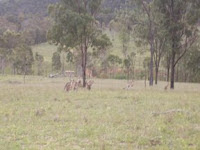 Okay, so my family is touched! But I got the work all finished by lunchtime. After lunch I agreed to a stay of leaving for 'Salina to watch a movie and I commandeered some downtime - and took V for a drive around part of the property.

Because of the nature of our times out there, V has not got the drives that my Dad used to take us on every weekend - the "check the property this is not work" task that occurred regularly - so I took him on the scenic route. 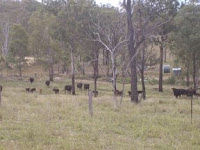 This picture is so cute - my family have Brangus cattle, and their habit is to have the calves in "nursery" with a few babysitters while the mothers graze a little way away - but if anything disturbs the babies they come running from the hills! It makes them easy to muster. 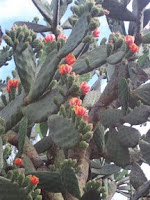 The prickly pear are in flower, which either means it will be a good season or a really crap one - they need it to be the former! 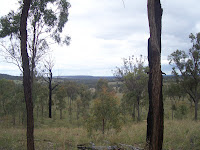 This is a view from Top Back Creek towards the house - V now at least has a bit more basic knowledge when our family refers to landmarks and act as if they are just over there, when in reality could be 15 km away!

On the way home to Paradise, we again we stopped at our usual playground (where there is a merry-go-round with real live plastic horses to ride) - and lo and behold, some kind stranger had found the sandals and put them in shelter! It makes you smile to know there are good people in the world.

When we got home, we flaked.

Both V and I had friends who sorely need to be better appreciated. I had just found out about some computer v!ruses (see below) and was a bit sad on behalf of a funeral that I couldn't get to.

Then I found out about Lucky Dube's death. I had helped with the band in Sydney when he came on tour - of the guys that were out here with them, very few are left alive - some due to the same senseless violence that Lucky died from.

When they were here, we had some of the guys at a newsagency in the Cross when a suspected shoplifter was caught. You have never seen 3 Africans disappear into the shelves like them - they could not believe a gun had not been brought out, because that is the way it would have been at home.

On top of that, I did not get my chance to catch up on the world online - due to (a) getting a v!rus (in the form of a Mozilla Update, I am pretty sure - I don't tend to open attachments) and losing all Firefox essentials (and bookmarks) - such as a menu, toolbar, window or control - just a wee blue line with "Firefox" and an "x" on the screen - close it and you got another... I flicked to my AVG - who told me "yes, we did find a v!rus a few days ago - put it somewhere safe but couldn't save you but WELL, WE ALSO DIDN'T LET YOU KNOW LIKE WITH A BLODDY GREAT WARNING SIGN!" - oooh.

I went to IE, which I have problems with as every so often it has a memory clash with something else and wants me to debug it... I did a little surf on essentials (you know, follow up emails) and clicked on a facebook message - and wham - 14 pop up windows appeared - I tried closing them down as fast as they opened, but scared the carp out of me.

According to AVG, today I have nothing at all wrong with the computer - it is all d-a-n-d-y - I am not so blithe as once I was!

Yesterday (Monday) was a pupil-free day for the kids, so I had 'Salina in tow to do more mundane tasks or left her to her own devices while I just did what I had to do - great interactive mothering, hey?

As is our way, the day that 'Salina gets a pupil-free day is the day that V gets to knock off the work site early! We are still in that stage of our relationship where a few hours of prospective child-free time is a luxury to be enjoyed, not endured - but was not to be. Instead, V got to take 'Salina for a cycle and swim at the beach. For which I was very appreciative - as I said, great at interactive mothering!

So today I am very tentatively approaching the machine. I was less tentative about reminding a client that the money due a week ago is still not apparent - as that stands in the way of decent v!rus protection, new opportunities and my trip to Armidale - and was successful with that, at least.

Electrolux still aren't giving me any love - they aren't hating me either, just giving me the "we'll call you" shuffle and leaving me in limbo.

That brings us almost up to date - 'Salina is at guides, so V and I have had some child-free time (where I blogged - priorities!), V is cooking mexican (its Tuesday night - its always much anticipated tacos and burritos) with additional difficulty as I forgot the seasoning mix!

So I will sneak out of here - should be back to blog surfing strength soon - until then, hello all internet friends, I miss you...
Posted by jeanie

And we missed you Jeannie
we love your blog

Jeanie I was exhausted just reading about your weekend..your family sure has a great work ethic!

Hope you get the virus sorted out quickly..they are such a pain!

Wow, you do keep busy!
Good luck with the virus-cleansing.
I use AVG, too, but when it finds anything, I go to Symantec's website to clean it. There's also an online scanner there you can use as a backup checker.
Your family's property is gorgeous!
Am crossing fingers for the good crop. :-)

So jealous, sounds like you've had much for fun!