How I am celebrating Stress-Less Day

I love deadlines. I like the whooshing sound they make as they fly by.
Douglas Adams -English humorist & science fiction novelist (1952 - 2001)

As I mentioned below (yes, I know - two posts in one day!), today is World Mental Health Day. Or, if you are in Queensland, it is also "Stress-Less Day".

I was discussing with a friend this morning whether procrastination was a tool of mental anguish or mental health.

On the one hand, you have looming goals and deadlines that seem to grow exponentially. You cannot ignore them, and they are just more and more imposing the longer you avoid them. I think this is quite stressful - yet I procrastinate.

She mentioned that procrastination had recently been given new meaning to her, as someone explained it was the mind's way of preparing itself for the impending stress - a sort of stretching and limbering up before exercise, I presume.

I am not sold - however, it is a much more restful way to view procrastination, methinks.

So today, I had a very short to do list - just those little, minor, pesky tasks standing between poor me and me who has some self-generated wealth - and then I was going to reward myself by digging among the newly cleansed garage area for some materials and patterns to make myself and 'Salina some Summer threads.

After lunch, I then:

It actually wasn't that difficult! No, really, not hard at all. Of course, it could have been done by 9 this morning but I needed to flex a lot before committing!

So - only two more ticks required and I shall reward myself.

So - do you find procrastinating stressful, or stress-less?

* By the way, my friend is one of the artists showing at the in a display for Mental Health Week - and you can buy some of their paintings.

I would give you the link to where it is meant to be, but my friend has just called me and her "Stress-less Day" has been a doozy.

Last year, the exhibition was at The Powerhouse in Brisbane - and that is where she was told and where she assumed it was this year - as you would.

So she decided to celebrate by going to view her pictures and those of other artists - only to find they were not there!

She had to laugh (long after the event) on the image of herself running all over The Powerhouse (amongst the trendy folk who looked askance at her) trying to find the Mental Health Art Exhibition. She thinks they all thought she was certifiable.

So I will let you know where it is when she finds out.

Here is the 8 headed sunflower - fantastic, isn't it? 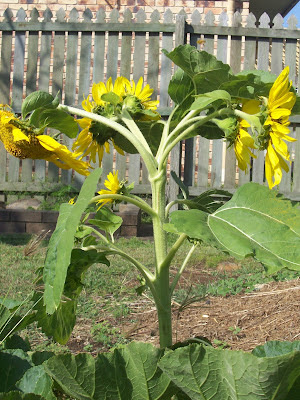 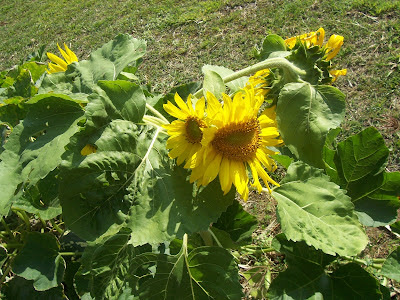 That flower is amazing! I didn't know they could split out like that!
Procrastination, hmmm. I guess I'd have to say it's a little stressful, because then you still have the "to-do" item(s) hanging over your head, but then we girls do tend to give ourselves too many things to do, so trying to get everything done at once would be more stressful, I think. I actually have categories on my To Do list: Do Now, Do Soon, Do Sometime... :-)

What a gorgeous flower!

I have something for you over at my blog!

What an amazing sunflower.

I look forward to seeing your friends work :)

What a crazy sunflower!!

I procrastinate, too. The quote at the top is hilarious.

I am a total procrastinator, which is why it's a good thing my job involves so many deadlines.

just-me-jen - I like your compartmentalising - but it may take me even longer to do my to-do lists!

Thank you so much, Mama Zen - I will finally make that mantelpiece to put it on!

MGL - prompted by you, I have finally found where the exhibition is - and it is blogworthy so may be my next post.

Tee - I love Douglas Adams work - you can find more wonderful quotes by him at: http://www.quotationspage.com/quotes/Douglas_Adams

Cathy - I agree, generally deadlines are wonderful fences for procrastination.

I published my comment but it didn't show up. D'oh!

I think procrastination implies feeling guilty and therefor always involves stress. If there'd be no guilt/stress, we'd just call it 'taking it easy' or 'doing whatever the heck you feel like'.

And I think the worst thing about perpetual procrastination is that you end up having no 'taking it easy' or 'doing whatever the heck you feel like' days because you're forever trying to make up for lost time to reduce your guilt.

So maybe they should've called it guilt-less day instead.

It's great that you ended up getting so much done and maybe as a reward you should hide your to-do list for a little while now. :)

WOW! A Stress Free Day?! I wish we had them over here.