How to stuff sleep patterns, a Meme and Operation Wednesday

(Warning - vegetarians may want to skip down about half-way)

How to stuff sleep patterns

You know those days when you wake up refreshed and think how you will attack things with clarity and passion?

Well, today was not one of them.

Last night's sleep was of the variety "hmm, not asleep yet. How about thinking about something like that tongue you have to cut up and press in the morning." Mmm, guaranteed sleep NOT.

About that tongue. Months ago, my sister and her family came for a visit and brought an esky of meat - because we are that sort of family. (When V first discovered that I was the daughter of a cattleman, I am sure that his interest in me, already quite keen, went up a few notches. His exclamation of "beef - my favourite meat" leads me to this conclusion.)

So anyway - we have worked through all of that esky except the parcel labelled "corned beef" as ham is so easy to get ready sliced and you don't need to boil for hours and find an ant's nest for the water afterwards.

On our holiday to visit the family, we had corned beef as a hot meal. Now, my only experience of this in the past was the boarding school offering, so you may forgive me if the thought of that didn't induce salivation. However, my BIL's mother had a very good recipe passed on to the next generation, and it was not only extremely edible but also became a hit in the 'Salina camp.

Yesterday morning (at 3.30am), I took out that corned beef to thaw. By the time I put together the secret ingredients the crock pot recipe required, I had talked it up quite a bit to 'Salina, so she was there as I unveiled - a cut of beast that was very obviously previously used to cush grass.

After dry retching, my country girl roots came through and cooked the darned thing anyway. Also, my parents were visiting last night, and I could not show them how soft I was. No, the worst case scenario is that the darned thing would be shipped back to the place of origin as dog food - but I would try the old recipe trove for a solution - that, and I am so tight I could not "waste" good food when shekels are being counted this week and hoarded against our menu choices.

It now lies in a dish with a lid weighted on top and we will see if (a) it sets, and (b) we have any takers. V's reaction was dry retching also, so his love of beef seemingly has limits where recognisable features are concerned, too.

So, as I said, not a great night's sleep. However, it did stand me in good stead for a pleasant little task set for me by Foilwoman's Diary.

An interesting animal I had
I grew up on a cattle property. There was only one "pet" and that was Mum's Siamese cat, Gabriel Katari Aloysius. Of course, we had poddies, ponies, dogs and horses - even at one time had a beautiful lamb. This brings us to

An interesting animal I ate
This is where the definition of "interesting" comes in to play, as Mary-Jane was all of that to a seven year old. As we had only cattle, "ground-lice" were things of delight and wonder, and Dad had brought her back from a visit to his sister's out West. She was great fun - except when she got into the house and crapped everywhere. I am sure that is why we were allowed to discover the state of our rooms after we had been on a week's holiday BEFORE we discovered that Mary-Jane had gone, and we were having lamb for dinner.

An interesting thing I did with or to an animal
When I was about 5, my godparents and their children came to visit from Sydney - a large, mysterious city in the South. My sister and god-sister were of a similar age and went off to bond in 7/8 year old style - and so my 11yo god-brother and I were playmates. We discovered we both had an interest in amphibians - and thus began a week of frog-wrangling. We got the fathers to make us a little frog house, with a slide door and mesh roof. We spent hours catching flies against the side-veranda windows and offering them to our hapless frogs. (Do not feel too sorry for the frogs - their only options were to be fed and grow fat and happy around the artificial pond in the frog house or climb onto the open beams above the patio and follow family tradition of seeing if they were Superfrog - they rarely were)

An interesting animal in the Museum
In the Queensland Museum on the upper floor, there is (or was) a great display of ancient Australian animals - one of them appears to "breathe" as you walk past and will scare the bejesus out of you and any child you are taking on an educational excursion! I am not one for reading the labels however. They also have an endangered animals exibit that has the sound effect of road kill being enacted - anything to enlighten youth, hey?

An interesting animal in its natural habitat
One of the joys of growing up in the country is having your own dump. Mum and Dad are natural hoarders, so it was with great difficulty that anything ever made it to this trove - and sure as eggs, we kids would troop down there and "discover" stuff - or rediscover. While there, we would sometimes shade in the nearby trees, and if you looked between the granite boulders you could see curled balls of echidna. We never actually saw them out and about - we did see a few snakes out and about which eventually cured us of the dump runs.

There are no real "rules" it seems on this meme - but I would love to see the takes on this offered by Mad Goat Lady, Magic Bellybutton, ArkieMama and DOASMOTE's Janeen - but only if you want to!


(Vegetarians - you are safe to join back in!)

After that start, did not fire until after lunch really. 'Salina had a playdate this morning that allowed me to wrangle with the computer for an hour or so - still have some boring in front of the computer stuff tomorrow for 'Salina to whinge about but hey, I anticipate monetary rewards for such wrangling and she anticipates me having money some day so I can water down the whinging.

When she came home, I noted that the whiteboard had two seemingly innocent lines. One said "floors" and the other said "fans".

Never one to do things by half, I moved all of the furniture into one corner of the living room, poured all the bicarb I had over the carpets, put the dining table beneath the living room fan and gave 'Salina a cloth, a bucket, another chair and a project. I then swept all of the tiled and lino floors, washed them, vacuumed half the available carpet, rearranged the spare room, started dismantling the TV unit to put into the spare room, vacuumed the other half of the available carpet and pegged the 3 loads of laundry I had sporadically induced the 25 year old washing machine to churn during the day.

Of course, now I have a living room that looks more like a camping ground, at least 3 large pieces of furniture to move to completely different rooms or aspects of rooms to get anywhere decent.

I have to do this in the next day an a half - as 'Salina's father's sister and son are going to visit from Friday afternoon. She is actually fairly good value, but cleans houses for a living and can be a perfectionist, so I have to bust a gut to get to her standards. Sigh. Something is not right with the world there!

Tomorrow I also have to defrost the freezer and fridge while they are bereft of goods, take 'Salina swimming (payoff for her letting me out of the swimming/cycling half promise I didn't get around to today), do a grocery shop and rearrange 'Salina's room and turf a heap of detrius.

Friday, as well as collecting the Greek/Croatian connections I intend to mow the lawn, sort the detrius downstairs into a cohesive "garage sale or turf" plan.

My little whinge - I will have no adult help during daylight as V is with a new boss he is much happier with and while the days may "feel shorter" they are actually about 2 hours longer - but then, a happier but tireder V is a price I am willing to pay OVER one that involves certain previous bosses exploding from dagger looks or pushing my love one inch too far. Oh, and add to that New Boss's longer hours options takes away some budgetary constraints I have whinged about above by tomorrow morning, so I will just shut up now.

I will have 'Salina's help, but that little lay-by plan that is working for us so well has a downside - she expects payment for the slightest show of enthusiasm.

Oh - and the photo essay I promised - ha ha, only took photos of 'Salina, ponies and cousins the whole week! What is new. Here is a typical one: 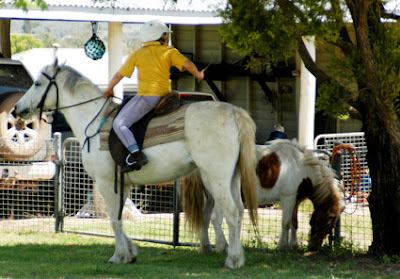 This is all why I maintain my addiction to blogs - otherwise I would be far too busy to have a life!
Posted by jeanie

So I'm thinking you could save yourself some time and get the perfectionist house cleaner house guest to do your cleaning for you. Hmmmm?

SO, I'm dying to know...How was that tongue? I don't think I could have done it, but Hubby's brother says tongue is the best. I will have to take everyone else's word for it though!

I'm so squeamish about meat. I hate to touch it and I hate when it looks like... meat. LOL. But I love to eat it once it's ready.

Corned beef is great in a Rueben Sandwich :)

Corned beef is fine, but I don't reckon I could eat tongue. Have vague memories of seeing it as a child - think it was something that Mum would eat, but we wouldn't. Given I'm city born and bred, yet nowhere near being vego, I confess to the convenience of turning a blind eye to the origins of the meat that I eat....

Stop making me feel so slack in the housecleaning department!!

Thanks for the tag. Will take it up - once I think of some answers!

I'm pretty brave when it comes to eating vegetables or fruits but things that used to have heads? Not so much.

In primary school I had a friend who would bring sandwiches to school, often with brains or tongue in them, which I thought was GROSS! My Gran served up a platter of meat one Christmas Day - I'm not a big meat eater, so I picked the leanest pieces, and was horrified to flip one piece over (on fork on the way to my mouth) and see TASTE BUDS.

Wow, you are so full of interesting\hillarious\thoughtful bits today, Horray!

I'll have to do this meme. We had sheep growing up. Holly, Dolly, Ellie and Sherman.