It was one of those days

As can be gained by the previous post, I awoke very early to whirrings of political intrige...

At 4am trucks carrying a house rumbled past - there goes the neighbourhood!

I was then greeted with the news that 3 - possibly 5 - of my family members will be visiting - tomorrow night! Love having guests but certainly fast tracks the rearrangement of the spare room.

V awoke with an aching and a groaning - my head pounded from the early morning (and contemplation of politics) - so he remained my partner in crime all day. Neither of us were especially entertaining to each other - oh yes, dreams of hours of child-free time yet when it is heaped upon us we wasted them in trifles of household chores and collective moans.

'Salina also awoke early - which did not translate into being bouncy and eager to get ready for school - whether my weariness or her propensity to push my buttons, but it was a lot rougher morning than most getting her off to school.

Got a call from the client of my client wanting to know how soon everything will be ready by, but that is a question I cannot answer as I am waiting on an answer to a question myself. May have been abrupt on a subsequent phone call - I am very much a people person if everything is flowing smoothly and in the direction I require, but I am afraid that virtue wears thin when viscocity is compromised...

Good news is I received a parcel from America: 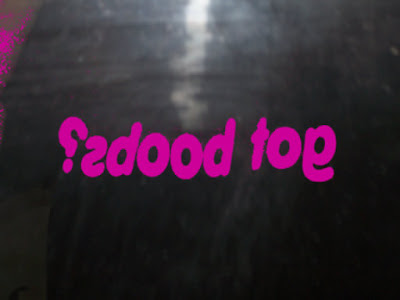 Will be doing The Betty Boobs tomorrow (quoth the raven)

Lay down on the lounge room floor after lunch for 5 minutes - and awoke 1 1/2 hours later. May have been refreshed but suddenly remembered Japanese theme tonight.

Went to print out the information to find that the USB device intermittently signalling SOS that I have been ignoring was the final throes of the printer, and it is now a plastic oblong objet d'art as the verb "print" no longer defines its usefulness.

So instead went to get the fixings for the special sushi. As you can see from the following recipe, it called for flat leaf parsley, smoked salmon and white sesame seeds.

Well, our local IGA did not have parsley of any persuasion - but I got a good deal on avocado and thought that could do for the green! Then I could not find any smoked salmon so had to settle for ham. Hmm - didn't even bother with the white sesame seeds!

So all in all the girls at guides ended up making a fairly Aussie variation of a traditional Japanese dish and enjoyed the experience - and I came home to a much healthier V who had tacoed us up for dinner and the ending is much better than the beginning.

Make the usuyaki tamago. Dissolve the cornstarch in the water. Beat the eggs lightly with a fork or chopsticks (not a whisk or it will become too bubbly) with the sugar, salt and the cornstarch/water.

Heat the small frying pan over a medium-low heat. Brush lightly with oil. Put about 1/8th cup or 3 tablespoons of the egg mixture in the pan, swirl carefully so it coats the bottom of the pan but doesn’t slosh up the sides. Hint: use the same scoop or spoon to measure equal amounts of the egg - I use a 1/4 cup measure, half filled.
Cook just until the top is barely set, then carefully pick up the omelette with the spatula and flip over. Cook for about 10 seconds just until it’s set, then flip out of the pan. The omelettes should be yellow, and not browned. Repeat for the rest of the egg. You should end up with about 12 to 14 omelettes.

Sprinkle the chopped up smoked salmon with the lemon juice, and let sit for at least 10 to 15 minutes. Fold the sesame seeds, salmon, and mitsuba or parsley into the rice, trying not to smoosh the rice grains too much.

Divide the rice into as many portions as you have omelettes. Put the portioned rice on one quarter of one of the omelettes. Fold the omelette in half, then into quarters. Turn over so the rice part is on top (the weight of the rice helps to keep it stable). Squeeze the sides a bit so the insides can be seen.

Note that you do not need dipping soy sauce for this, since the sushi itself is already flavored quite well.

Glad the day got better. I would be impressed if you managed to make that just at home, but you did it with a group of girl guides. A medal is in order I think!! Or an award at least!